TL;DR – As Season Two continues we start to see where the lines in the sand will be drawn, and characters are starting to take a stand against the coming storm

So we continue our look at Cleverman’s second season, and after the carnage of Revival (review), we get a couple of episodes to hold our breath … nope, we continue steam rolling through the season with carnage in our wake. So today we will be discussing both Bindawu & Dark Clouds so there may be some spoilers going forward, however, if you want to be careful and have not watched these episodes, then I would suggest avoiding the paragraph on openings and cliff-hangers towards the bottom.

One of the big themes this season has been the duel progression of Waruu (Rob Collins) and Koen (Hunter Page-Lochard), well maybe not duel, more likely the opposite progression. So, on the one hand, we have Koen learning what it is to be a good leader, and trying to make the world a better place because he knows the pain of being excluded and mocked. On the other we have Waruu that had everything he could ever want, a family that loved him, a place of pride in the community and he gave it all away for power and ‘respect’. This standoff has led Cleverman into instead of talking around a lot of post-colonial issues, just going bam, this is what people did. Stripping everything away from people, their identities, their culture, their language, their names, all in the name of assimilation and safety. What’s worse is at the heart of it is Waruu, a man who should know better, a man who should have listened to his wife Nerida (Jada Alberts) who warned him, that money is not free.

Actually, this leads on to the next point I wanted to talk about, when I was reviewing Season One of Cleverman one of the critiques I had was that many of the women characters felt almost passive participants to the story up until the final episode. However, this is very much not the case in Season Two and in both Bindawu & Dark Clouds women were in many cases the main driving force. A good example of this is Araluen (Tasma Walton) who rightly eviscerates Koen, both literally and metaphorically, for all the harm he had bestowed upon her family. Another good example is Dr Charlotte Cleary (Frances O’Connor) who has spent a long time being controlled by her husband Slade (Iain Glen), to the point where she may have been used as an unwitting experiment in eugenics. However, this season, she has started taking more agency over her life, even if it may lead to some unintended consequences. Given the carnage, many of the men in positions of power have been doing its good to see others taking a stand.

I also have to point out the amazing work the location scouts have done in finding locations for the second season. The closing pan over the waterfall and the cliff were simply gorgeous, you need to make the most of every moment to tell a story and nothing else showed the remoteness, and what was at stake. Another highlight was the Melaleuca/Paperbark forest where Koen meets Uncle Jimmy (Jack Charles). Now probably the Gum Tree is the most iconic of Australia’s flora, but for me, nothing beats the beauty of a forest of Melaleucas, the smell of the leaves, the feeling of the paper bark under your fingers, and Cleverman captures that moment on screen.

There is something truly beautiful about a Melaleuca forest.

[SPOILERS]Another highlight is the way Cleverman uses the opening and closing scenes to captivate viewers. In Dark Clouds, we open on Yani (Tessa Rose) getting up and quietly walking out of the Hairy camp and into the city. She is tired of hiding and just wants to come out into the sun, even though she knows what it will cost her, without any dialogue it tells a powerful story. This immediately draws you into the episode, but what makes you want to come back is the ending, and wow what an ending we have here. In the ending of Dark Clouds, we have three intertwined conflicts, Slade and Charlotte, Koen and his past, which leads to Koen and Waruu meeting. Charlotte puts Slade in his place and demands to be let into what he is doing, and it is not clear who is paying who, but none of that matters because they are interrupted and attacked by Jarli (Clarence Ryan). We find that Aunty Linda (Deborah Mailman) didn’t just cause Koen’s parents deaths through negligence, but she was actively trying to kill them, immediately turning everything we know about a character on its head. However, you don’t have time to process that because Waruu has just slit Koen’s throat and is slapping on some red kryptonite to stop him from regenerating, end of the episode. To have three major plot events happen in the last five minutes of an episode, and still have it all work shows the work that has gone into the production to get it right.[End of SPOILERS]

One issue that is there, is it does feel like we’ve spent a bit too much time hunkered down in the same location with Nerida, Latani (Rarriwuy Hick), and Alinta (Tamala Shelton) as they hide from the containment authority. Now it could be fine, once we see the season as a whole, but at the moment it starting to drag out a bit too long. 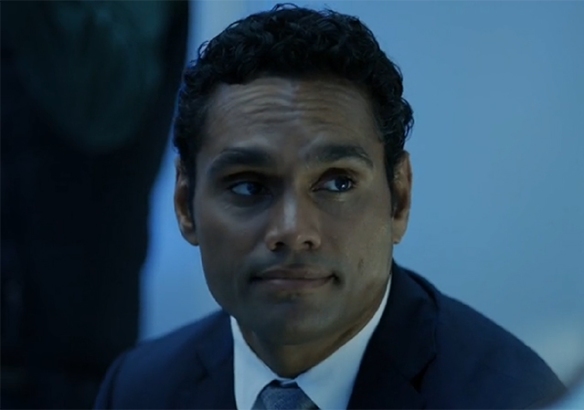 Oh Waruu, how far will you fall

In the end Season, Two of Cleverman is continuing to build on its mythology, and going from strength to strength. The frustrating thing is that it seems for some reason not to connect with audiences, at least with regards to viewership numbers, which is a real shame. At the moment no one else in Australia is producing science fiction like this, let alone shows that make you think and reevaluate the world you live in. So if you have not checked Cleverman out yet, please give it a look on ABC Iview, Sundance TV, it is also on Netflix in a lot of places. With the next episode, we start looking at the second half of the season, and I get the feeling things are about to get very complicated.

Have you seen Bindawu & Dark Clouds?, let us know what you thought in the comments below, feel free to share this review on any of the social medias and you can follow us Here. Check out all our past reviews and articles Here, and have a happy day.