TL;DR – Relationships and repaired and torn, and for some blackmail is the least of their worries

So at the end of last week’s episode Dark Clouds (review) we find that Aunty Linda (Deborah Mailman) didn’t just cause Koen’s (Hunter Page-Lochard) parents deaths through negligence, but she was actively trying to kill them, and then Waruu (Rob Collins) just slit Koen’s throat and slapped on some red kryptonite sap from a Melaleuca to stop him from regenerating. Oh boy, was that a lot to take in, and we have had a week to learn what everyone’s fate will be, and tonight’s episode Muya packs all the same punches and more, as we continue our drive to the end of the season. Just a warning, there will be some [SPOILERS] going forward so be careful. 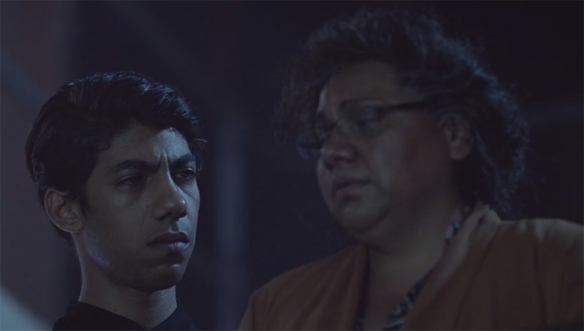 So tonight we open with the aftermath of last week’s murder, but wait he isn’t dead, Koen Surprise. Well, it was sure a surprise for Waruu, as Koen beats him upside the head and makes a quick exit, but whatever Waruu did, it has messed up Koen’s abilities. Charlotte (Frances O’Connor) was been kidnapped by Jarli (Clarence Ryan) with possibly only the fact that she has a Hairy baby keeping her alive, but has she seen too much. Also Nerida (Jada Alberts), Latani (Rarriwuy Hick), and Alinta (Tamala Shelton) have made a run for it after finding out that Tim Dolan (Luke Ford) was a containment authority agent, but their flight is short lived as they are captured by the CA trying to get out of the city, and all that happens in the first couple of minutes. This season of Cleverman is not wasting a minute of screen time, there is no faff, no padding, and I wish more shows were like this.

One of the big themes this episode was redemption, both those seeking it and those giving it, and how there is power in forgiveness. Koen has every right to let Linda die, die alone, and not see her ancestors in the beyond. What she did is unforgivable, anyone would find it almost impossible to forgive such a betrayal, but Koen does. In many ways this shows that Uncle Jack (Jack Charles) was right when he said that Koen was the better choice for Cleverman, because does Waruu forgive, no, he slits his brother’s throat to get ahead. Also, does Slade (Iain Glen) forgive, no he uses terrorism to blackmail the government to further his goal, even when that means exploiting his own wife’s kidnapping. There is a moment when Koen could have let his hate overwhelm him but he doesn’t, and that is as good as any sign that he is ready to be a leader.

It’s about to go down

One of the highlights of this episode was the dueling monologues of Koen and Latani, as they both face off with personal demons, and in Latani’s case a very real demon. Koen yelling at Jack who isn’t there was so powerful because you feel the betrayal and the anger. What makes this even better is all of this is caught in one take, there are no cuts, and it shows the talent of the cast and crew that they pulled that off. With Latani, she is finding her strength, when she needs it the most, she is captured by someone who I have no qualms calling scum, with a gun to her head, with only moments to steady herself for what is to come. In many respects both of these monologues/soliloquies made me think back to The West Wing and Bartlet yelling at God in Latin, one of the best episodes in that series. All of these monologues work because the cast is game for anything, the writers Jada Alberts and Jade Allen know the characters and crafted this to their strengths, and Leah Purcell directs them wonderfully.

Finally, one thing I want to touch on for a moment is how wonderful it is that we have Indigenous languages on Australian TV. I grew up in a time where history at schools didn’t really go back past the First Fleet, Uluru was called Ayres Rock, and we still had not apologised for the Stolen Generation. Now while some of this has improved, there just is not a lot of Indigenous representation on Australian screens, let alone Indigenous languages and cultures. Also, I’ve said it before and I’ll say it again, the makeup work in Cleverman is amazing. It is so good that we have the amazing talent of Weta Workshop and the production designers here in Australia, and that talent shows. 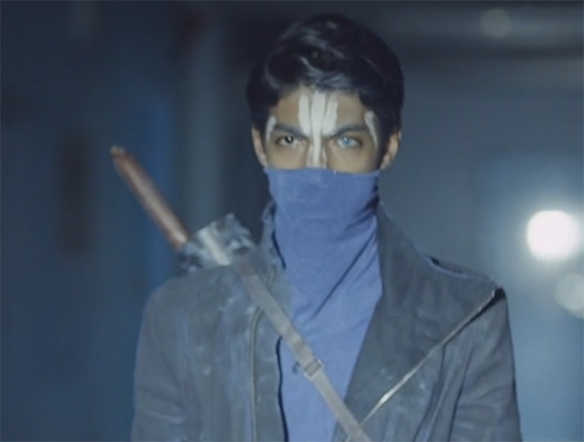 oh boy, we got a costume change

In the end, this season keeps going from strength to strength and I’ll repeat what I said last week “at the moment no one else in Australia is producing science fiction like this, let alone shows that make you think and reevaluate the world you live in”. Why do I keep saying this, while other than it is true, but Koen just got a costume change, and hell hath no fury like a righteous super hero that just donned their outfit, also hell hath no fury like a mother separated from her child, and I think a few people will learn that particular lesson before the season ends.

Did you get to watch Muya?, let us know what you thought in the comments below, feel free to share this review on any of the social medias and you can follow us Here. Check out all our past reviews and articles Here, and have a happy day.