TL;DR – Tonight is the beginning of the end, as people come together and others get wrenched apart

So today we have reached the end of Game of Thrones’ penultimate season, and more than probably any than have gone before the game has changed completely again, though the more things change the most they stay the same. Now, this is the final episode of the season, so now more than ever There Will Be [SPOILERS] Ahead, if you have not seen the final episode then I would recommend not reading any further.

To catch us up to where we left off in last week’s Beyond the Wall (review), well we ended on that bombshell that was that not only has Daenerys (Emilia Clarke) lost one of her dragons, but that the Night King (Vladimir Furdik) reanimated it as a wight. They were lured into a trap and it worked, but John (Kit Harington) and what was left of The Magnificent Seven managed to capture the wight they needed. So it was not a complete loss, ok yes, I know, it was a complete disaster, but on the plus side we found out where all of Tyrion’s (Peter Dinklage) missing chains from the Blackwater ended up, so it wasn’t a complete loss. Now while all this was going down and we were finding out that the crows of Eastwatch could transform into jets, things were getting worse for the Starks in Winterfell. Littlefinger (Aidan Gillen) had realised that with Bran/Three-Eyed-Raven (Isaac Hempstead-Wright) and Arya/No One (Maisie Williams) reuniting with Sansa (Sophie Turner) that his control of Sansa was weakening, as was his position in the game. So he has been manipulating Sansa and Arya behind the scenes, to fracture the Starks. Oh, and you better believe that Cersei (Lena Headey) is using this distraction in the North as an opportunity to strengthen her position. 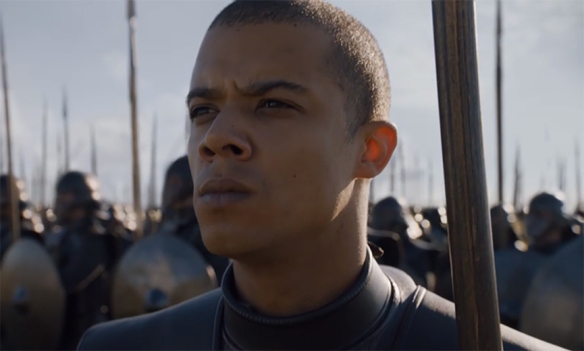 You got to admit, they opened on a power move

In today’s episode, we had two competing narratives, the great meeting in the South at King’s Landing, and the consolidation of power in the North at Winterfell. There were times in previous seasons where we could be jumping across multiple storylines in multiple cities and even continents, so it is kind of telling how close we are to the final moment that things have narrowed as much as they have. Of course, this is helped even more in today’s episode because just about every major character was in the one location and nobody got killed.

So let’s start with the South and then we will move to the North. The Great Meeting was a big gamble by everyone, because at any moment all hell could have broken loose and every could have died, indeed Cersei created a kill order for The Mountain (Hafþór Júlíus Björnsson) in case things went south and Bron (Jerome Flynn) quietly got Podrick (Daniel Portman) out of the killing field to protect him. I think the last time we had a meeting like this it was the Purple Wedding so you know there is going to be tension, and tension there was. This is because just about everyone there had pretty good reasons to want to murder everyone else, and Daenerys brought her two dragons so the whole city could have gone up in flames, let alone with all of Grey Worm’s (Jacob Anderson) Unsullied and a Dothraki horde waiting outside the gates. This meeting was also telling because of where it took place, the Dragonpit, it is the last of the three defining landmarks of King’s Landing that we have finally gotten to see (the others being the Red Keep & Sept of Baelor for those playing at home). This is where the Targaryens housed their dragons, though once they were contained they became smaller and smaller with each generation until they were no more. This is an important symbol for both sides, it is a reminder that House Targaryen use to rule, and the damage dragons can do, but also that they had once withered and died into madness. 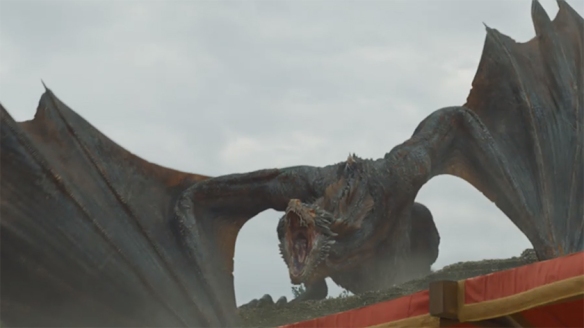 I am Dragon, here me roar

Within all this symbolism and tension we get the two sides meeting for the first time, well the first time meeting not on a battlefield. Of course, it went as well as can be expected, there were shouts and accusations, mockery and threats, and then the wight was released and everything changed. For many people there it was the first time they had seen with their own eyes that the fight was real, but of course, just when they were making progress Jon had to go be all noble and what not, sigh you are lucky I can’t stay mad at you Jon. So we get Tyrion and Cersei have a sit-down and eventually we get not just a truce but the Lannisters would actually join the war against the undead. What a profound moment of people coming together, seeing a bigger collective thread and rising about the pettiness to work together. Is what I want to say but bloody Cersei was playing everyone, she let Tyrion know she was pregnant so her change of heart was sincere, Euron (Pilou Asbæk) playing the coward fit everyone’s expectations of him so no one expected duplicity, hell she was so convincing that her chief bannermen including Jamie (Nikolaj Coster-Waldau) were starting to plan the march north. But nope Euron was off getting the Golden Company, which may be setting up the return of someone in the books but still has not appeared in the TV show. This finally brings Jamie and Cersei’s growing conflict to ahead. One of the issues with the TV adaptation that I have had is that they have struggled to map out Jamie’s redemption arc, but after so much it was good to finally see him take a stand against his sister and her duplicitousness, which was wonderfully articulated by Ramin Djawadi when he played echoes of Cersei’s theme from the last season finally when she blew up the Sept of Baelor. Also quick note Cersei, you killed Tommen by gloating rather than comforting him, so don’t you go dumping all that mess on Tyrion.

However, while all this is going on in the North it is still a fight to consolidate power in Jon’s absence, as winter is no longer coming it is here and Lords are getting nervous about the threats from the north and the south. It is within this chaos that the letter telling everyone that the King in the North has bent the knee arrives in Winterfell, and all that tension finds a catalyst to burst forth. After all that scheming, pitching sister against sister, to maintain his power Littlefinger finally gets Sansa to act against her sister, and it was such a disappointment to see sister turn against sister and … wait a second … no there are not going to … slice. One of the predictions I made all way back when reading A Storm of Swords was that by the end either Sansa or Littlerfinger would be dead by the other’s hand, and while it was technically Arya, I’m going to say I called it. It was really interesting to see the different stages Littlefinger went through as he became more and more aware of just how much trouble he was in, from bravado, to confusion, to indignation, to trying one last manipulation, to bargaining, to begging, and then finally the whimper of a man who has lost everything. It was a testament to Aidan Gillen’s acting skill that he could go through all those changes in emotion and still be convincing. Now I said all the way back in Stormborn (review) “and could someone just kill Littlefinger and get it over and done with” and they did, and thus Aidan Gillen became the only main cast member to die this season. 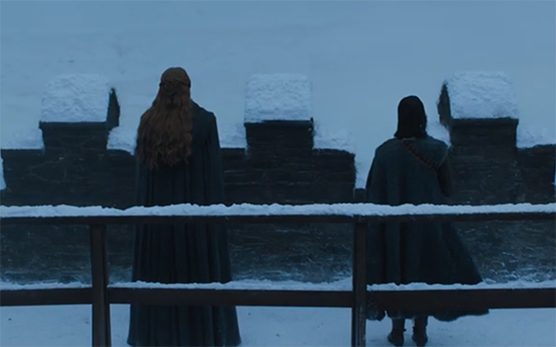 We are stronger together than alone

Now we ended of course with two major plot points, but before we get there I want to take a moment to give my congratulations to Theon (Alfie Allen). I know there is going to be a plethora of articles out there that think they are being witty with titles like ‘Theon found his balls’, but more than that I think people forget that Theon is someone who has suffered unimaginable horrors, and that means he is a broken man in more ways than one. However, I think he has finally found a cause that can make him whole again, and I kind of hope he can make that happen. Now, of course, we have the official confirmation, there is no way you can misinterpret it, they say it clearly for all to see that Jon Snow is the legitimate son of Rhaegar Targaryen and Lyanna Stark, indeed Jon is not even his real name it is Aegon. Of course, we jump cut from that reveal to Jon and Daenerys bumping uglies, which puts us in a very interesting position. Because on the one hand it’s like woo yes, Danny and Jon, Fire and Ice, the King of the North and the Queen of Dragons, and on the other Aunty and Nephew, this is going to create some interesting discussions going forward.

Finally, we have that big moment, that moment everyone feared because tonight that seven seasons, six books Chekhov’s Gun finally went off and The Wall finally fell. This, all happened because The Night King riding on the back of the undead Viserion ice flamed Eastwatch into oblivion. Now two things, of course, it was the dragon named after Viserys that was the ruin of us all, and two while we have been complaining about the speed of the White Walkers, I guess we have to give them credit for playing the long game. Whatever the case there is only one thing for sure now, The North is in grave danger. 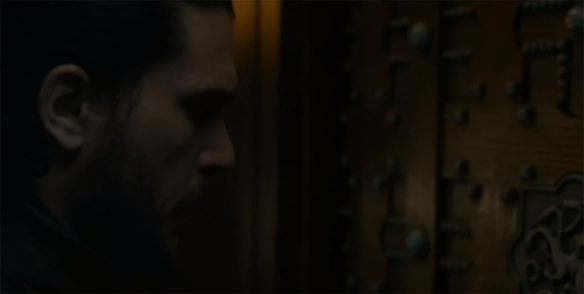 Yer ‘It’s Complicated’ does not quite cover this

In the end, we got reunions, we got betrayal, we got death, and we got world ending events, though no Cleganebowl but you can’t get everything. In some respect, this was a very reserved season, but it was also quite transformative, this created an interesting juxtaposition that I might look into a bit more. I don’t know if this is my favourite season, but it really had its high moments, and I think it has set up the end game really well. So goodbye Season Seven, and hello Season Eight, and we’ll see you back then to review it.

Have you seen The Dragon and the Wolf?, let us know what you thought in the comments below, feel free to share this review on any of the social medias and you can follow us Here. Check out all our past reviews and articles Here, and have a happy day.

3 thoughts on “TV Review – Game of Thrones: The Dragon and the Wolf”