So today we have reached the half way point in Season Seven of Game of Thrones, and if you thought they were going to let up after last week’s slaughter you will be sadly mistaken. So at the end of last week’s The Queen’s Justice (review) Daenerys (Emilia Clarke) had lost pretty much all the allies she came to Westeros with. Yara (Gemma Whelan) is a prisoner of Euron (Pilou Asbæk) her weird uncle who is making a point to woo Cersei (Lena Headey) like right in front of Jamie (Nikolaj Coster-Waldau), like dude, that’s a party foul. So the Greyjoys are done, Dorne has been lost as Ellaria (Indira Varma) is chained in the dungeons of King’s Landing watching her daughter die, oh and with Highgarden falling and the apparent death of the Lady Olenna (Diana Rigg) #QueenOfThornesUntilTheVeryEnd she has lost the Reach as well. All of this is topped off with Tyrion (Peter Dinklage) being outmanoeuvred by his brother leaving Grey Worm (Jacob Anderson) and the rest of the unsullied trapped in Casterly Rock. Everything, all her carefully laid plans have failed, but when you back Daenerys into a corner, history has shown that this is when she is the most dangerous. Now, of course, there will be [SPOILERS] incoming.

So at the start of the episode, we are in the aftermath of the Battle of Highgarden, with Jamie and Lord Randyll Tarly (James Faulkner) and his son Dickon (Tom Hopper) walking off with the plunder, all their gold as well as their food stores for the coming winter. Here we get some wonderful banter between Jamie and Bronn (Jerome Flynn) and you realise just how much you have missed these two characters bouncing off each other. All of Cersei’s plans have come together, which is good for the Iron Bank of Bravos and their agent in Westeros Tycho (Mark Gatiss) who is glad the Crown is paying off all their debts, but more than that, it seems the Bank has picked a side.

In the North, after seasons apart we get three of the Stark kids back in the same place which has not happened since The Kingsroad all the way back in Season One. But before Arya (Maisie Williams) can arrive, Bran (Isaac Hempstead-Wright) has to say goodbye to Meera (Ellie Kendrick) who is leaving to go home to prepare for the coming war. This was a hard scene because it is here where finally get the confirmation that Bran for all intents and purposes is gone, only the Three-Eyed-Raven is left, Bran died in that cave. But the Starks are reunited, and for once two of them are calling Littlefinger (Aidan Gillen) out, Bran letting him know that chaos is a ladder and Arya with a stare, just a stare, but what a stare. There is power when the Starks combine, Littlefinger knows it. Also, we get some amazing interactions, between characters that have not seen each other for years, Ayra’s list got brought up but I don’t think Sansa (Sophie Turner) truly believed. It is here where we also got one of the best one on one sparring scenes in the show so far. Brienne (Gwendoline Christie) was teaching Podrick (Daniel Portman) when Arya arrived. Then we got an amazing duel between the two, everything in this scene worked. The actors, the transitions to the stunt performers, the f/x, everything worked in tandem to produce one of the highlights of the season so far.

While Jon (Kit Harington) is still King in the North, he is spending a lot of time on Dragonstone, as he gets the Obsidian mines up and running. Which is good because who knows what Daenerys would have done if he was not there and she got the news that all her allies had fallen. Part of me does feel bad for Tyrion because it was a solid plan, and it should have worked, bar the fact that Cersei discovered that tactics were a thing she should use. But our time of Dragonstone this week was all about learning a few more things about the world. We find that near the Obsidian mine was an old Children of the Forest shrine, and Jon has to decide if bending the knee is the price he has to pay to save his people. As well as this, we also got to know more about the Island of Naath the home of Missandei (Nathalie Emmanuel), why her people follow Daenerys when they don’t have to, and also that Davos (Liam Cunningham) is more quick witted than just about anyone else in the Seven Kingdoms.

The Starks are back in town

Now all of this leads to what happened at the end, and if you ignored my warning at the start be known that there will be [SPOILERS] here. After seven seasons teasing this, we finally get to see those Dragons wreck through an opposing army. I have to give a huge shout out to Matt Shakman to how he composed this battle sequence because it played on every facet. First, we have the reveal that the Queen is not at Dragonstone, then we cut to Jamie, Bronn, and Dickon discussing the realities of war, and we really get to see that Dickon is not like his father or Cersei, he is conflicted about what he has to do. But whilst they are having their usual banter, there is this moment when Bronn goes from all jokes to something is wrong in a second. He can hear the oncoming storm, and this moment is wonderfully played by Jerome Flynn. So then we have the Lannister army quickly try and form up to protect their flanks, only to see a horde of Dothraki storm over the horizon. When seeing what is coming, Bronn tells Jamie to get back to King’s Landing, but Jamie won’t abandon his men, of course, this is the moment we hear the Dragon roar, and we see Daenerys riding Drogon into battle. One moment there is a defensive line set up to stop the Dothraki horde and the next there is just screams, fire and ash were men once were.

This whole sequence and what follows is incredibly tense because, for one, Dragons change everything, but also for the first time in a long time, we had a battle where there were people on both sides that I liked and didn’t want to see die, but they were fighting each other. This gave the battle a different dimension to say the Battle of the Bastards that we saw last year. The pacing of the battle was really good, with highs and lows, we pull back and get to see the battle from a far from Tyrion’s perspective, we get down right into the middle of it and see the world burn around Bronn as he races to get to the Scorpion. From a production point of view the visual and practical effects blend seamlessly during the battle, indeed I wouldn’t be surprised if they won a record for most stunt people set on fire for an episode of television. Of course all of this is punctuated by Ramin Djawadi wonderful score that uses a blend of strings and horns to build tension on the coming doom. 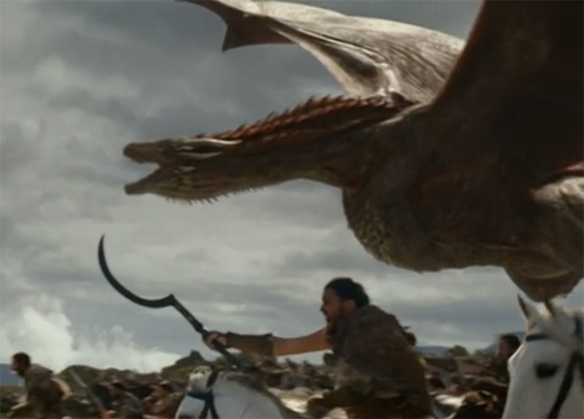 From a story perspective, and sorry to put my International Relations hat on for a moment, this also marks an important shift in Daenerys tactics. She is willing to use her dragons in battle show the world that she has these weapons, weapons that negate every tactic, every defence, but she only uses them on a legitimate military target. She can demonstrate to the world that she has these weapons and that she will use them, but also that she is not here to burn down their towns and cities and slaughter the common folk. I think this is a poignant reminder because today is the 72nd anniversary of the nuclear attack on Hiroshima, which was I may add, an attack on a city.

In the end, what Spoil of War has done, is completely shift the Game around again, much like last week did as well. We don’t really know who survived the attack, all the food that was being collected for King’s Landing just went up in smoke, literally, we have no idea how Cersei will respond, oh and the Scorpion was not super effective, which of course it wasn’t, they should have tried ice type first, not steel.

Have you seen The Spoils of War?, let us know what you thought in the comments below, feel free to share this review on any of the social medias and you can follow us Here. Check out all our past reviews and articles Here, and have a happy day.

3 thoughts on “TV Review – Game of Thrones: The Spoils of War”