TL;DR – What is the future of the Federation going to be? As the war drags on we get a glimpse of two possible directions.

As the season draws on, we are seeing more and more a growing divide into the future direction of the Federation and Starfleet during the war. Should noble ideals be cast aside in the name of survival? Should the rules of Starfleet be ignored on the front line? This divide is important because as we see here it will mean everything for the next generation of officers.

So to set the scene, the war continues on with a unified Klingon Empire with their stealth ships and things are not going well. So not well, that Sarek (James Frain) was sent by Vulcan High Council to meet with some rogue factions of the Klingon Empire to create division and disrupt the war from within. Well, that was the plan, however, his travelling companion V’latak (Luke Humphrey) turned out to be from a small radical sect of Vulcans who are opposed to the integration of Vulcan into the Federation. Thus the logical thing to do was to sacrifice himself for the greater good, hmmm that sounds familiar, and turn himself into a living bomb. While Sarek, managed to protect himself so he and the ship didn’t die immediately, he was severely wounded, and his ship knocked out of warp into a hostile nebula. So Sarek is dead right? Well no, because he still has that katra bond with Michael (Sonequa Martin-Green) and subconsciously reaches out while she is in the middle of breakfast, and a rescue attempt is started. From here on out we will be breaking down the episode so there may be [SPOILERS] incoming.

Towards the start of the episode, we get a clear example as to the two divides as shown through relationships. First, we have Michael and Cadet Tilly (Mary Wiseman) going for a morning job, so that Tilly can get her average time down to get a physical endurance commendation, a stepping stone on her journey to the command of a starship. Command should be a noble pursuit, one that takes hard work and merit. On the other side, we have Captain Lorca (Jason Isaacs) training with new Lieutenant Ash Taylor (Shazad Latif) on a pre-TOS holodeck. Here there is an undercurrent of suspicion, and that he is being offered the position of chief security officer as a personal favour. He is looking for people that he trusts, more so than if they are the best fit, or indeed if the job is best for them. There is also an undercurrent of not disappointing him with comments like “if you don’t bring her back, don’t come back at all”. The interesting thing is even though they are starting to diverge, Michael would not have her position on the USS Discovery if not for Lorca’s … well to put it mildly unilateral command style. Which I’m sure is going to lead to some interesting moments throughout the rest of the season.

While we also see the twin styles of command between Lorca and Michael, in Lethe we also get to see two events from their pasts which shaped them get brought to the forefront. For Michael, it was the day that she was not accepted to the Vulcan Expeditionary Group, because she was not Vulcan enough even though she was at the top of her class. Throughout the episode, we see more and more of that day revealed, and how Sarek’s calculations backfired on himself dramatically. More so, at the end we saw Michael use the revelations to make a positive change in her life and how she coaches Tilly, who I might add is fast becoming my favourite character in the show, given her consistent wonderful optimism. On the other hand, Lorca is forced to face his past by the literal presence of Admiral Cornwell (Jayne Brook) on the Discovery. It is here we see, what many had suspected, Lorca is not a well man since the destruction of the USS Buran, and Cornwell is able to see that through all the bravado. Throughout this episode, Lorca does not learn from his past, though he does learn how to hide it better, and through the sin of admission allows probably his greatest friend be captured by the Klingons than risk her relieving him of command. This has meant that his one and probably truest friend is lost, and this will only mean a further deterioration for Lorca. 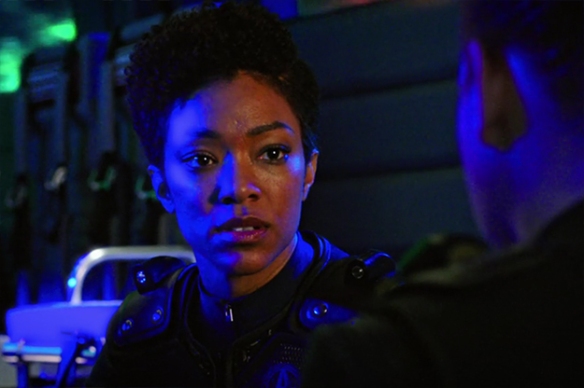 The lighting in this episode was amazing

On the technical side of things, once again Discovery is standing out as one of the most visually impressive series to date. Those long slow pan shots border on spacecraft porn, and for once I am ok with that. The establishing shots of Vulcan were also a delight, as was the external sets, it was nice to get out of space for a moment. One thing I do want to mention is the lighting in this episode, it was simply gorgeous at times, especially inside the nebula. The way they used the colours of the nebula to highlight Michael was simply amazing, and a credit to the cinematography team.

In the end, I’m really finding the direction of the story quite captivating as we hurtle through the season. It will be interesting to see if Lorca and Michael come to blows, and if she has to ask another commander to step down, this time for the right reasons. I get the feeling that Cornwell is going to be the ticking time bomb for Lorca, because I think he has only stalled the inevitable not removed it. Also, it will be interesting to see what Ash’s future is, is he a love interest, is he Lorca’s pawn, or is he a Klingon spy, only time will tell.