TL;DR – What is the future of the Federation going to be? As the war drags on we get a glimpse of two possible directions.

Today we get Star Trek Discovery’s first bottle episode, and what is a bottle episode you may say? Well, this is a term in TV for an episode that uses minimal effects, guest stars, and filmed only on existing sets. You may have seen many of these before, where say something forces people to stay in one location, or if you are really unlucky you get a clip show like The Next Generations episode Shades of Gray. Bottle episodes are usually created to be cheaper episodes to produce and tend to be looked down on, however, good bottle episodes use the limitations to tell profound stories like the Deep Space Nine episode Duet. So like all good bottle episodes, we spend a lot of Magic to Make the Sanest Man Go Mad getting to know our characters better, and it is a delight to watch. Now as we will be looking at the full episode there may be some [SPOILERS] ahead, so be a bit careful if you have not seen the episode.

So at the end of last week’s Lethe (see review), we had a move to stability, whilst also showing just how unstable some of the characters are. So Michael (Sonequa Martin-Green) and Ash (Shazad Latif) have become de facto science officer and chief of security respectively. This in some way moves Discovery into a more familiar dynamic that we have seen in the past. However, after much suspicion, it became strikingly clear just how unstable Lorca (Jason Isaacs) is and how dangerous that has the potential to be for all around him. Now since Lethe, the war has started to shift in the Federation’s favour, so the Klingons are looking to try and take down Starfleet’s ace in the hole, and they are prepared to go to some unorthodox places to see that happen. So yep, much like the recent Happy Death Day (see review) we got ourselves a Groundhog Day situation as Harcourt Fenton “Harry” Mudd (Rainn Wilson) saunters aboard in the belly of a Gormagander, like a pissed off Jonah with an axe to grind. 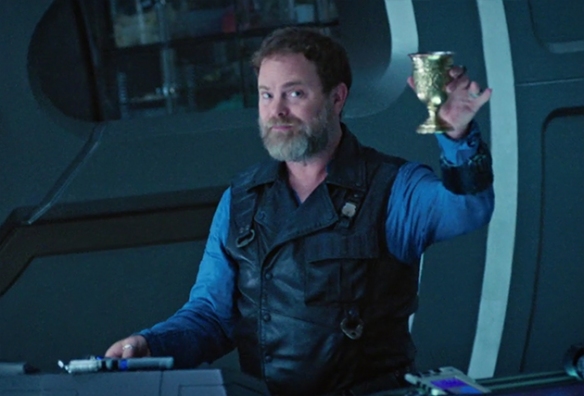 So today’s Groundhog Day scenario is brought to us by a Time Loop mechanic, as Harry Mudd resets time every half an hour in his attempt to take down the USS Discovery. Of course, this is not the first time in 744 episodes where we have seen a time loop, most notably in The Next Generation episode Cause and Effect, which should be noted came out a full year before Groundhog Day. However, it had more weight here because it is not an accident, or freak of nature, instead, it is the forceful determination of a man to find interesting ways to kill Lorca whilst capturing Discovery for his Klingon masters. Overall I think they did a good job of keeping this mechanic from feeling bland for two reasons. The first is that they don’t get bogged down with the repeats, it is made clear from quite early on in the episode that there have already been multiple jumps already, so you don’t have to wade through multiple attempts before people work it out. The second bonus was having Paul Stamets (Anthony Rapp) being able to cheat because of his tardigrade DNA that he got in Choose Your Pain (see review). This helped because you had someone with agency trying to run around and save the ship, and you kind of understand his drive, even though he has failed over 53 times.

Indeed this is the first episode that had Paul as a major focus of the episode. He has been there supporting other characters but today he gets to shine as the driving force trying to take down Mudd. Anthony has a wonderful intensity in his eyes and that translates into his performance, and it was nice watching him play matchmaker. Of course, we have to talk about Mudd a character that is played with such wonderful energy by Rainn Wilson. Throughout this episode, he kind of slips between the psychopathic killer, and the jaunty conman, which is such a difficult balance to pull off but Rainn does it so well. Also, we get to see more of Ash and Michael which is a really interesting relationship dynamic to explore, I just hope Ash does not turn out to be a Klingon spy. I think in general, what is really attaching me to Discovery is the characters, I relate to them, and what to see them succeed and that is a testament to the writers, directors, and of course the actors.

Magic to Make the Sanest Man Go Mad shows that even when the show is going over some familiar territory it still has the strength to feel fresh. This is because it is clear that everyone is giving their all and as a fan of Star Trek it is just a joy to watch. Also, we are quickly heading towards the mid-season break and it will be interesting to see just how they are going to end it, because there are some supporting characters we have not seen in a while, and I get the feeling they are about to return in a big way.