TL;DR – Just when you think Star Trek Discovery is done surprising you, it pulls out an emotional punch followed by a 2 by 4 to the head

I have to take my hat off to the team over at Star Trek Discovery, tonight had a reveal that spent episodes building up, the reveal felt completely justified and not contrived, and I did not see it coming at all. That is such a difficult difficult task to pull off and make it feel natural, it was magnificent to watch. Now we will get into that a bit later when we can get into spoilers, but wow, this is one of the best episodes of Star Trek I have seen in a very long time.

So to set the scene, we are still in the Mirror Universe and with Despite Yourself (see review), The Wolf Inside (see review), and now Vaulting Ambition this is the first time in Star Trek’s history that we have spent more than two episodes back to back in the Mirror Universe. At the end of The Wolf Inside, the Emperor of the Terran Empire revealed herself and it was none other than Philippa Georgiou (Michelle Yeoh) and well it is time for her and Michael (Michael Burnham) to meet. Also, it was revealed that Ash Tyler (Shazad Latif) is actually Voq (Shazad Latif) and the two sides of him are at war due to L’Rell’s (Mary Chieffo) making. Now just a warning that from this point onwards there will be [SPOILERS] incoming.

So tonight I want to take a moment before we dive into the story of the episode to talk about the amazing production work that goes into each episode of Star Trek Discovery. You can see it at so many points throughout the episode, and there is a no better example that than with Her Most Imperial Majesty, Mother of the Fatherland, Overlord of Vulcan, Dominus of Qo’noS, Regina Andor, the Emperor Philippa Georgiou Augustus Iaponius Centarius. Her outfit/costume/imperial robes were intricately detailed and used visual language to tell a story about who this character was even before she started her speech. Her throne room in a mobile command centre ISS Charon powered by a small sun, probably an expansion of Romulan singularity technology. Which is both a fascinating design but also tells you a lot about Terran psychology, the seat of the empire is never in the same place, it is much harder to hit a moving target. Her weapons the agony booth, her sword, and flying fidget spinner of death, are both wonderful and also help tell the story. It is visual storytelling to the max, and I love the details that went into this.

Ok, let’s do this and talk about the story in tonight’s episode because at the start of the episode Michael warned us that “A reckoning was coming” and she was not wrong.Ok, last [SPOILER] warning … ok … so let’s pull that Band-Aid off quickly and dive into that big reveal at the end of the episode. So guess what everyone Lorca (Jason Isaacs) is not Human he’s actually a Terran … *Inception Sound*. This was genius because not only was it completely unexpected, it also completely worked because all the clues are there for you. I immediately thought back to some of the reviews earlier in the season where I was close but not quite there like in Choose Your Pain (see review) “Lorca has always been the difficult new character, because he is making it very hard for people to root for him, but that does not mean you don’t understand where he is coming from. In many respects, he is the other side of the coin to Philippa Georgiou when it comes to the direction of Starfleet’s and the Federations soul.” I even picked up on the coordinates in Into the Forest I Go (see review) but at no point did I put all the pieces together, I just excused his behaviour as someone who had been impacted by the war and it was starting to show, which means he manipulated me just as well as the characters in the show. I think the last time a show did a reveal as well as this, was The Red Wedding in Game of Thrones, or maybe the end of Season One of The Good Place. 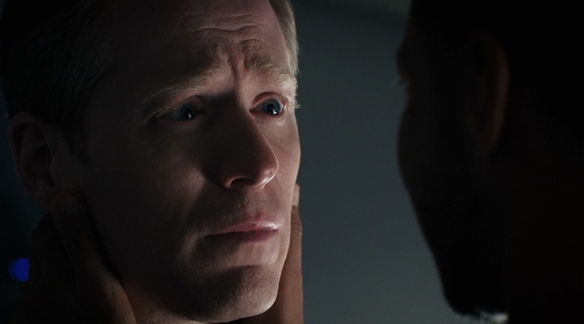 While the reveal of Lorca will probably be the thing that people remember from the episode, I also want to take a moment to look at what might be the big theme from the episode, and that is the power of relationships. The first relationship is between Voq/Ash and L’Rell, throughout the episode Saru (Doug Jones) is trying to get L’Rell to help save Voq/Ash’s life. We learn that both Ash and Voq went into making the person that walks the corridors of the USS Discovery, and for L’Rell if Voq dies … well so be it he was a soldier and this is war. However, when faced with the realities of the deaerating Voq/Ash she was compelled to help, and her funeral call for Voq was moving as was the scenes with Saru. Both Doug Jones and Mary Chieffo should be applauded for how much emotion they can convey under all those prosthetics. Indeed from one death to another, this week we find Stamets (Anthony Rapp) alive but trapped in the Spore Network, it is here where he meets the Mirror Universe Stamets (Anthony Rapp) who has been haunting him for some time and may have something to do with his current condition. However, while walking through the halls of the USS Discovery that was recreated in the Network he spies Hugh (Wilson Cruz) his partner who was killed by Ash. Even though he is not real and Stamets knows he isn’t, he still wants to live one last beautiful moment with the man he loved, and I teared up with the “I don’t want to say goodbye”.

Now the final relationships is those of Michael, Philippa, and Lorca. Michael has a difficult relationship with Philippa because she was a role model for her, only for Michael to betray her trust, time might have healed that wound but fate was cruel and took Philippa away from Michael before that could happen. So with this complex emotions, it was fascinating watching Michael relate to Mirror Philippa who we discover also had a mother/daughter type of relationship with the now dead Mirror Michael. However, Lorca became a father figure for her in the Mirror Universe and then a romantic and manipulative relationship. Lorca used his relationships to gain the trust of people only to betray them, and also it puts a much more creepy light on his mentoring of the Prime Michael.

Look there is so much more that we could pull out of this episode, like how bad Lorca’s weapon room is now, or how the principles of The Federation are distilled into Equality, Freedom, and Cooperation, but I have to stop somewhere. One of the writers once talked about these plot points as rocks being thrown into a pond and how the consequences ripple out, well I can’t wait to see what happens next week with the revelations here. In the end, do we recommend Vaulting Ambition? Yes, it is the best episode of Star Trek Discovery so far, and one of the best episodes of Star Trek I have seen in a very long time. This was a wonderfully written, directed, acted, filmed, and designed episode, and it was amazing to watch. Now if you will excuse me, I’m going to go watch Vaulting Ambition again.