TL;DR – An interesting start that gives us a real direction as to the tone and where the series is going.

I was coming into Disenchantment with a bit of a mixed mind as I have an interesting relationship with Matt Groening’s work. When I was growing up we were not allowed to watch The Simpsons so when you did see it at a friend’s place it was this little rebellion, so I hold some of those early episodes to be quite dear to me. However, I can’t tell you the last episode I watched, at this point, I could be over seven seasons behind. On the flip side, while all this was happening Futurama came and went, and then came again and then went again, and I would count it in the top ten TV Shows I have ever seen. So where would Disenchantment fall? Well from the first episode we can see that it is at least going to be interesting.

So to set the scene, Princess Tiabeanie (Abbi Jacobson) or Bean is a Princess in an old-timey Fantasy kingdom. We open with her in a tavern cheating her way to winning a game of poker when all hell breaks loose. After outsmarting her opponent she almost made it out when she was captured by the royal adviser. It seems that today is the day of her wedding, though since this is medieval-ish times and she is royalty, this is a wedding to ink a deal on a political treaty and not for love. Meanwhile, Elfo (Nat Faxon) is working on a production line in the Elf Forest making all sorts of candy. His job is to put the little bows on the trays, but he has no desire to join in on the sing-while-you-work mentality … which leads to him getting hanged … things escalate quickly. Finally at the ceremony Bean opens a present which had a curse, Luci (Eric Andre) the demon. They are there to be a bad advice muse, to lead her to the dark side. And lo, we then have our Princess, Elf, and Demon as per the title. 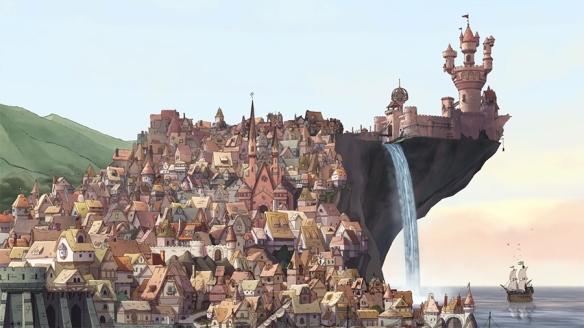 I really like the world they have created here with Disenchantment. Image Credit: Netflix/Rough Draft Studios

The first thing you notice is the craftsmanship that has gone into creating the world and the characters that are in it. It is interesting how Matt and Co have created an art style that is both incredibly flexible but also clearly a distinct style. You could say have a character from Futurama appear and it not feel out of place, yet it still has a striking view to itself, which you can see it small cameo homage to a character from Futurama. I think for me there were a couple of moments that I looked back and was really impressed in the world that they created, the city looks equal parts believable and absurd, and the gnome/ogre battlefield was fascinating if very morbid. Another great addition to the episode was Mark Mothersbaugh’s musical score. From the very moment the episode starts it blasts out at you, and in an era where music is meant to shrink into the background, it is a fun change of pace to see it up front and centre.

From the first episode we also get to see the tone and style of where the show is heading, and this will be the thing going forward that will propel it or hold it back. The first thing that is clear is that this is a show that is in part a parody of the fantasy tropes that are common in the genre today. So there is hints of Lord of the Rings, Game of Thrones, and many others, I mean we even get a nod to The Princess Bride in the first episode. It is here where a lot of the jokes come from, and while not all of them work in the first episode, there were a couple of hilarious moments. What will be interesting to see is if the rest of the season sort of falls into a Shrek feel, or will they develop this to be their own thing. The show also takes an interesting turn by having a woman as the main protagonist in the series. As women were historically subjected during the real-time period this is drawing from, and tend not to be main characters in Fantasy literature (though that is changing gratefully). This gives the show a fresh opportunity to comment on the genre and how it has historically presents people other than usually male protagonist. 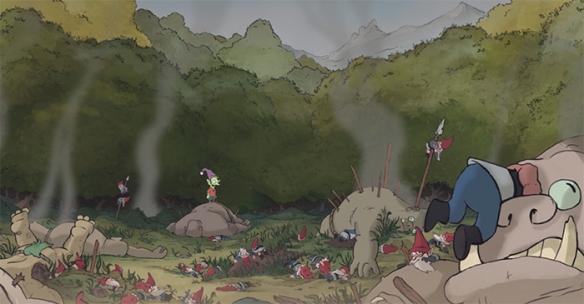 The first episode also very much sets the tone as to what is going to come later. Image Credit: Netflix/Rough Draft Studios

In the end, do we recommend A Princess, an Elf, and a Demon Walk Into a Bar? Yes, yes we do. It was an interesting start, and a good platform to launch a series on. Now will the rest of the series hold up as well, this I don’t know, but I do know I do want to check it out more.

Have you seen Disenchantment yet ?, let us know what you thought in the comments below, feel free to share this review on any of the social medias and you can follow us Here. Check out all our past reviews and articles Here, and have a happy day.