TL;DR – What we get is a series with some interesting moments and characters, but feels more of a prologue to something than a season in its own right

When you think over the parody genre, it is surprising that there are not more quality entries into it. Part of this is because many take the easy way out and just fill their shows with pop-culture references that instantly date them. To really do a parody justice you really have to understand the genre and works you are parodying to an almost obsessive level. These are your Galaxy Quests, and your 22 Jump Streets. Today we take a look at a new series working in this territory Disenchantment which delves into the myriads of tropes around the Fantasy genre, and mostly succeeds. Now we will be looking at the season as a whole, so there will be [SPOILERS] ahead.

So to set the scene, we open on the peaceful kingdom of Dreamland an idyllic snapshot of medieval life full of plague victims, rampant poverty, and trap doors into the sea below, as long as it is high tide. The kingdom is ruled by King Zøg (John DiMaggio) and his second wife Queen Oona (Tress MacNeille) but they are not the protagonists to our story. That is Princess Tiabeanie or Bean (Abbi Jacobson) daughter of Zøg and his first wife who passed when Bean was a young child. At the very start of the show, Bean is being forced to marry Prince Merkimer (Matt Berry) as part of a political negotiation to seal a peace treaty much the same way that Zøg and Oona came to be wed. But Bean had other ideas and running into Elfo (Nat Faxon) an elf escaping the constant positivity of the chocolate production line and Luci (Eric Andre) a demon bound to Bean to try and turn her to the dark side they escape the castle. Well until they are captured and the shenanigans continue. 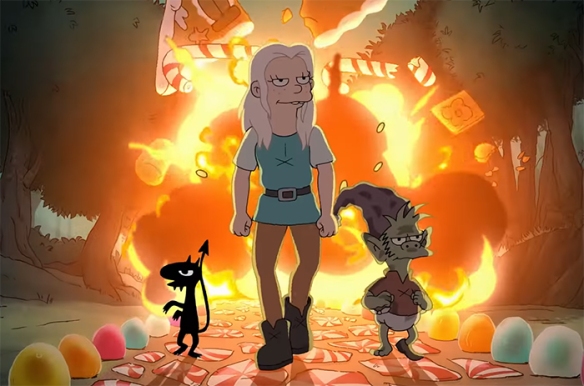 Our three leads are really interesting characters that it is fun to see develop over the season. Image Credit: Netflix/Rough Draft Studios

The first thing you really notice is the quality of the voice work, with our three leads being notable examples. This helps to create really memorial characters that you can’t help but root for. Bean is that princess that is not going to wait to be rescued, even when she is the one who gets herself into most of the messes she finds herself in. Instead, she is the one who takes charge, but the weight of the crown and her father’s wishes on her life drag her down at times. Elfo, is clearly not an elf, or a full elf, which we see in both his character design and in the offhand comments his farther drops all throughout the season. This means that he is a conflicted elf, but still becomes the voice of reason, the angel on Bean’s shoulder … that also wants a relationship with her. Finally, we have Luci, who is at first a one-dimensional character, but also is one that grows throughout the season. There is something going on behind the scenes with his introduction to Dreamland, as we see with the enchanters spying on his progress, and at first, he is just the devil on Bean’s shoulder giving mostly bad advice. However, as the series progresses especially at the end we get to see more of his character. This is aided by a strong supporting cast that at time feels like the show is getting the gang back together as we have a lot the old voice cast from shows like Futurama.

The focus on Bean as the main protagonist also allows the show to really dissect the genre and many of the tropes around women in the show. Disenchantment takes the route of acknowledging the social inequalities that exist between the sexes in this society and incorporate them into Bean’s story. As well as this, because they have written her to be this strong character, we see the mirror put up to other shows which tend to cast women as weak characters that one has to rescue. This also continues across the cast with the women tending to be stronger in their actions, and the men being more weak-willed characters or like Zøg characters with more bluster than substance.

The world they have built here is fascinating. Image Credit: Netflix/Rough Draft Studios

The other area where we see the real attention to detail is in the world they build. So this is a world that draws on a number of different sources, we have real-life medieval times, works of high Fantasy, low Fantasy, and even some fairy tales like Hansel and Gretel. This gives the artists a lot to be able to draw on and to subvert, so, for example, we get Vikings, but these are land Vikings. Now, this does mean that there are a lot of hints to shows like Lord of the Rings, Game of Thrones, The Princess Bride, and others. However, these are not so much pop culture name drops more homages that you can see. This gives the world a little more stability, even if the boundaries are not completely well defined as a random villager pointed out just moments before a not possessed or magical flaming arrow ended his question. Every new place they visit is always interesting to see, even when they are touching of familiar locations that you have seen in the genre before. The animation is this mix of traditional style 2D animation for most of the show, with some computer-assisted 3D sections added in, like when they spin up and around the castle. There is still a little oddness when blending the two styles, but they have done a great job to mitigate that where possible.

Where the show does not work as well as in its story, and here I don’t mean the individual episodes, but in the overarching direction of the season. So right from the start of the season, we know that there is power in an elf’s blood and that there is an empire out there looking to bring Dreamland down from the inside. So both of these give you hints that there is a bigger overarching plotline that goes further than the self-contained episodes. All through the season, there are hints to the direction the show is going to go however when we finally get there it all feels a little rushed. Towards the end of the season, and once again [SPOILERS] we discover the queen didn’t just die, but she was poisoned and turned to stone. It is here where the King’s drive to find the elixir of life gets put in focus, it is not for him but for his first beloved, and before I move on there are some really touching scenes in here, about a husbands love for his wife, and Bean having to pick which life to save. However, the former Queen (Sharon Horgan) gets brought to life at the end of To Thine Own Elf Be True, the penultimate episode for the season. This makes the final episode Dreamland Falls to feel less like a climax to a season, but more a rushed episode setting everything up for the next season. Add to this, I don’t anything will really catch people by surprise. There were also a couple of times where the show fell into the common practice of using fantasy races to be clear parallels for real-world peoples and cultures, and that does move the show into problematic areas in places. 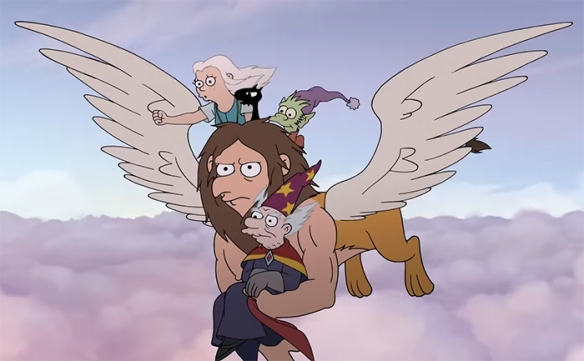 The style of the show mean they draw from a lot of different sources for the Fantasy side of things. Image Credit: Netflix/Rough Draft Studios

In the end, do we recommend Disenchantment? Yes, we sort of do. While we were not a fan of the ending, the ride to get there was entertaining for the most part. The voice acting is top notch, the world they have created here is interesting, and there were some interesting character developments throughout the season. As well as this, I am interested where they go from here, which is a handy barometer on the quality of the show.

Have you seen Disenchantment yet ?, let us know what you thought in the comments below, feel free to share this review on any of the social medias and you can follow us Here. Check out all our past reviews and articles Here, and have a happy day.