TL;DR – We start to see the beginnings of redemption arcs and internal conflicts, but we are still hitting the same tone each week.

It is the fourth episode of the new season, and if nothing else it has been such a great feeling being able to nerd out with other people over new Star Trek. This week is an episode where we get a bit more of the same, but we also get to see a bit of the direction the season is heading in.

So to set the scene, in the last episode Michael (Sonequa Martin-Green) accepted an ‘invitation’ from Captain Lorca (Jason Isaacs) to stay on the USS Discovery to help assist them in the war effort against the Klingons. In this episode, she is tasked with finding out information from the creature they captured on the USS Glenn with Landry (Rekha Sharma) Discovery’s security officer. Meanwhile, Voq (Javid Iqbal) has spent the last six months trying to get T’Kuvma’s flagship working after the damage done to it by the USS Shenzhou in the Battle of the Binary Stars. Here he is presented with a choice by L’Rell (Mary Chieffo), defile his ship with Federation technology or watch his crew starve. Finally after this notion that they are at war, this week we get a ticking clock as the crew had to jump to Corvan II or else all is lost. 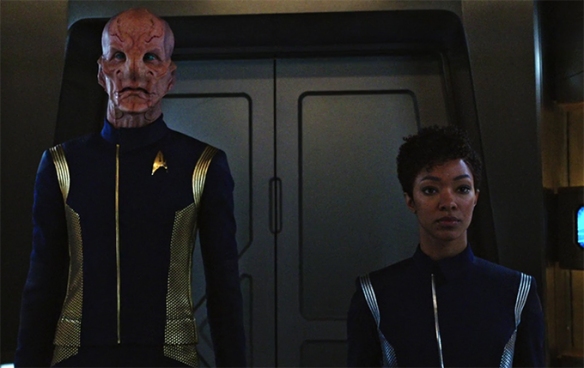 So, of course, I have to mention the fascinating and beautiful way they incorporate the spore jump into the very design of the vessel. One of the things you noticed about the USS Discovery is that it has a segmented saucer section. It was an odd design choice and I was wondering why they would go that way. Was it like DS9 where the design was created to stop boarders from reaching the bridge if the Klingon’s attack, was it because it was a research vessel, so the segmented hull is an extra precaution, firewalls, in case something got out? Well no and no, it is segmented because when the Spore Drive is activated the saucer hull rotates. One the one hand, this was a bit silly, but I have to admit it was such an amazing moment to watch.

It is also in this episodes that we start seeing some of the arcs that some of the characters will be taking this season. With Michael, we see the hints of her redemption arc, and her discovering her compassion. Her approach to the giant tardigrade is that of compassion and intrigue, rather than militant efficiency. This is going to put her on a collision course with the Captain, over what the Federation’s values should be. With Paul Stamets (Anthony Rapp) we see that tension between scientific ethics and military necessity play out and in ways that he is not ready for the consequences that could have. For Vok it is finding just how far he will go to preserve the legacy of T’Kuvma and how is he going to deal with Kol (Kenneth Mitchell).

I get the feeling that his season will be the tail of two captains, and which is the path you should follow

The one thing I will say is that with this episode we have been pretty much hitting the same tone throughout the season so far. Now Star Trek doesn’t have a lot of experience in long protracted war narratives, but we do have some guide with DS9. However, even here, they changed things up occasionally to give some respite, and I think we need some of that here. Also while it is getting a bit better, it is still clear that some of the actors are not quite as comfortable speaking Klingon just yet.

Overall I am still really enjoying Discovery, even the Klingon redesign is starting to grow on me. I think part of this is how they are working in the little details like that Corvan II was an industrial planet. I’m really looking forward to seeing where they go with these characters, and what the end game might be.

2 thoughts on “TV Review – Star Trek Discovery: The Butchers Knife Cares Not for the Lamb’s Cry”