Rebooting an old and much-beloved TV series is a fraught proposition. Now from a business perspective, it makes perfect sense because you have an inbuilt fanbase to launch the show to. However, it also comes with a lot of baggage with fan expectations and a wealth of information that you have to wade through and decide what you will keep and what you will ignore. So for every Battlestar Galactica or Doctor Who you have a Knight Rider and Bionic Woman that failed to get that balance right. Today we have a chance to look at a series reboot that actually gets that balance right, both showing it understands and respect of the original, but also a show stepping out and doing its own thing. Now as we go on there will be some [SPOILERS] as we will be looking at the season as a whole, so just be warned if you have not seen it yet.

So to set the scene, it is in the near future and a comet impacted with Earth causing such an environmental disaster that people are starting to leave. We join the Robison Family, Maureen (Molly Parker) mother to the three children and a aerospace engineer, her husband and also father of the kids John (Toby Stephens) a long-serving member of the military, Judy (Taylor Russell), the eldest daughter and medic, Penny (Mina Sundwall), trying to work out where she fits as the middle child, and Will (Maxwell Jenkins) the youngest of the three and someone who should not be on the trip as he did not pass the tests. They are all on board the Resolute as it makes its 24th trip to Alpha Centauri, setting up the new colony when they are forced to hunker down in their personal ship the Jupiter 2 when all hell breaks loose and soon they have crash landed on an alien planet and their ship is sinking under the ice. Now they have to survive a planet full of hostile creatures, other survivors like Dr Smith (Parker Posey) who might not be what they seem, an alien Robot (Brian Steele) that only Will can control, oh and did I mention that the planet that is literally about to die in a fiery cataclysm, so there is a lot going on. 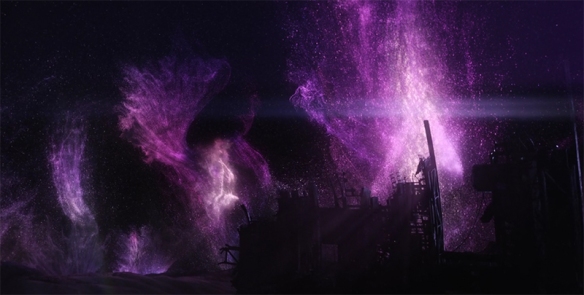 I love that Lost in Space takes the time to stop, take a breath, and show us something beautiful Image Credit: Netflix

This first season is not resting on the laurels of the past and instead has a lot going on with its story. So yes, it is primarily a story about the Robinson Family and the other survivors of the Resolute trying to survive on a dying planet. However, while that plays out constant narrative, we also get a flashback to the past to give us hints of the lives of the family and the directions that led them being on this colony mission. This is the first big difference from the source material who had the Robinson Family as the first pioneers travelling by themselves to Alpha Centauri, here they are part of a bigger group and this is not even the first trip to the new world. This helps ground the series a little bit more with a more realistic scenario, and as such it gives them more scope to explore the human side of space travel. This is because we don’t just have the Robinson Family but also all the other colonists with their own families, their own drives, and issues. So there are struggles all around and that is before it is revealed that the planet is about to have a tango with a black hole, and the Resolute is about to get out of dodge because they are not going to get sucked into that mess. So we have a number of ticking clocks going on, so every time something holds up the escape from the unnamed planet, but for the sake of a name let’s call it Bob, so every time they try to escape Bob and something goes wrong, you can feel the tension as each failure is one step closer to death. One thing that did get frustrating a little bit was that they did overuse the plot device of there being a big secret, only for it to get out and cause strife, a little too much. Though I did think the reveal that governments of Earth (at least America but it could have been more) shot down an alien ship, and probably irreparably destroyed the Earth’s ecosystem just to get their hands on the alien tech to actually be sadly quite plausible. Overall, I did like the story mostly because they populated it with such interesting characters.

Indeed, another strength of Lost in Space is the characters that we get to meet, and here is another way in which the 2018 series differed from the past. This is not the perfect nuclear family of the past, but a flawed family working through their flaws to help the ones they love. So we see from pretty early on that Maureen and John have a fraught relationship for very real and understandable reasons. John was a US Marine which already put a strain on the family due to his long absences, however, after the event, he was redrafted into active service. The breaking point was when Maureen discovered that he was not redrafted and instead volunteered to go, to the point where they were likely going to get divorced if the family haven’t gotten a spot on the mission. This creates tension as for a lot of the season the kids didn’t know whose orders to be following. This could have felt forced, however this is a real issue that military families have to face today and it feels real, and when at the end when John announces that he is not in charge, it is Maureen (everyone assumed it was him because he was a marine) after Victor (Raza Jaffrey) stuffed up it felt like a natural progression of their relationship. 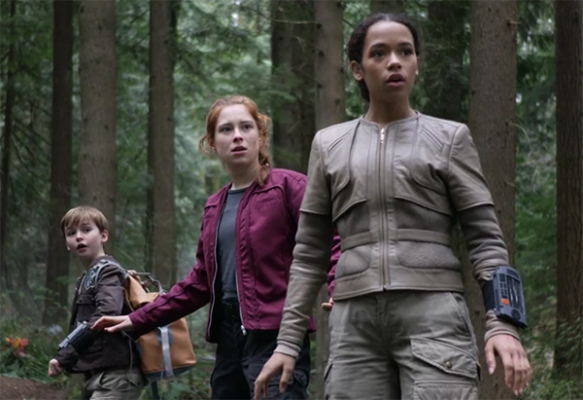 This feels like a real family with all the quirks, issues, and love that goes with it Image Credit: Netflix

The other big change is to the character of Dr Smith/June who has been almost completely reworked from the original yet still has a similar role. So in this version, June is a conman who never should have been on the ship but she stole her sister Jessica’s (Selma Blair) place. Also unlike both the previous series and film she is not the reason that the Robinson’ crash, though she did steal an access pass from the then still alive real Dr. Smith (Bill Mumy) as the ship was attacked by the Robot so she could escape. June stated several times that all she wanted was to go live quietly on Alpha Centauri and wanted no one to get hurt, and you still kind of believe that even with everything she does. All the actors in this show are fantastic, but goodness is Parker Posey compelling in this role. Now I’ve talked about this in the review of Impact (see review) but I also liked the new direction they took with the Robot. Oh and more of John West (Ignacio Serricchio) and Debbie the Chicken, please and thank-you.

One thing I do want to geek out a little bit before we end is the fantastic role that the continuity team did all throughout the season. There are the very visible things, like when someone gets cut you see that cut in later episodes as this is meant to take place over the span of a week or so. However, there are the smaller things that you see on a second viewing that show the team had an attention to detail. For example in The Robinsons Were Here we find out that a chunk of the Resolute came off and crashed on the planet with the other Jupiters. When they get to the crash site they find not only part of the ship but also its main receiving antenna. Well, when you go back and watch Impact you can see a brief moment of the ship and antenna being blown off before they got sucked into the wormhole/portal thingy. Also, the alien ship revealed at the end of Danger, Will Robinson you actually saw enter the solar system for a moment in the map shown in Resurrection. Little things like this really elicit repeat viewings, and show that there is a care given when putting the show together. 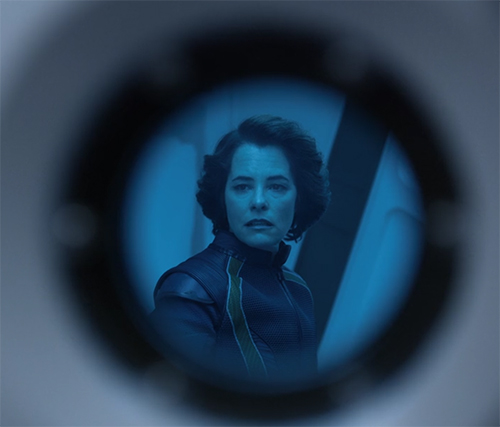 What an absolute revelation Parker Posey is as Dr Smith, some of the best casting on TV in a long time

In the end, do we recommend Lost in Space? Yes of course we do. It is a great Sci-Fi show, it is a great family show, and it is a great mystery show. In some respects, it reminded me of an old gem from the past Earth 2 and I hope it gets to explore things more than Earth 2 did. At the end of the show we got the Jupiter 2 being sucked into another wormhole/portal thingy and leaving the Resolute behind, possibly setting up the scenario of the Robinson’s alone in the universe trying to get home, but I kind of hope that they keep the other characters around for the future seasons because I think it brings a great dynamic to the show. Whatever the case Netflix has shown with this and Star Trek Discovery (see review) that they know how to handle Sci-Fi really well, and I kind of can’t wait to see what new or rebooted show they tackle next, oh and Netflix if you need some ideas I have a loooooooooong list you can take.

Have you seen Lost in Space yet ?, let us know what you thought in the comments below, feel free to share this review on any of the social medias and you can follow us Here. Check out all our past reviews and articles Here, and have a happy day.

8 thoughts on “TV Review – Lost in Space: Season One”