TL;DR – This is a show about helping people out of the problem they find themselves in, with more than a few tears along the way … mine that is

When I first heard they were going to do a reboot of Queer Eye for the Straight Guy, titled Queer Eye on Netflix, I honestly wasn’t that into it. I was starting to get really burnt out by the reboot fever that hit over the last few years, and this was before they started to find their groove with shows like Lost in Space (see review). However, over the months, things about the show would just pop up in my feed from time to time as the people around me watched it and after a while, I thought ‘blast it let’s give one a watch’ … well several hours later and much crying I had watched Season One all in one sitting. So when I heard there was a Season Two coming, this time I decided not to miss out and I watched them all over the first few days it was out and while it still had the moments of the first season there were a couple of more problems that did appear the second time around.

It is the genuine warmth of all the host that helps make Queer Eye a success. Image Credit: Netflix

So to set the scene, for those who have never seen an episode of this or the precursor series, each episode is sort of the same. At the start of every episode, we catch the guys as they are driving to meet the person for the week who is getting a makeover somewhere in and around Atlanta, Georgia. In the Fab Five, we have Antoni (food), Tan (fashion), Karamo (culture), Bobby (design) and Jonathan (grooming). Over the week they spend time with the recipient and work on helping them get ready for some event at the end of the week. This usually involves a makeover (of both the person and where they live), taking them out to get to know people or helping them with a problem they have, and just, in general, giving them a confidence boost.

The one thing that you need to know going in is that this is a series that will, not if, will, have you in tears at some point. This is because these are real people who are struggling and you can’t help but connect with them. Like Miss Tammye who spends her whole life helping others and who gave her house makeover to her Church to help it renovate its hall, or William who needs help finding the courage to propose to his girlfriend, or Skyler who has just got out of hospital after surgery to help him be who he wants to be. It is the real people struggling with their lives that grounds the show and create a deep emotional connection with you. For some people the very show’s existence is controversial but rather than play it safe the show goes out of its way to tackle really important issues. This drive means that sometimes it is the people of the week that has to confront their pre-existing views, while some weeks it is the hosts, and that is one of the core drives as to why the show works as well as it does.

It is also not afraid to go there. Image Credit: Netflix

The other half of that equation is the hosts themselves which bring the warmth to the show, though also some tough love at times, and who are the driving force behind its successes. We spend each episode with them so if they were difficult or obnoxious than it would be something that would be difficult to watch for more than a couple of episode. But this is not the case and you can really feel that they genially care about who they are helping and wanting them to better themselves. Each of the hosts is friendly, welcoming, and completely engaging, which helps when the first thing you do when you go into someone’s house is rummage through their cupboards. Add to this they are all full of really good hints and tips that you can bring into your own life.

Now while everything this season works about as well as the first, and that is a good thing, after I finished watching the season there was something about it that really was off-putting somewhat. This is why the review is a little later than I would have liked because I wanted to take some time and digest the season before rushing into anything. However, as the season went on there was a recurring theme that you just couldn’t help but see and I don’t mean the superficial things like how many of the house makeovers having similar a design language, or the fact that no beard was left standing. No the one thing that stood out was the apparent misunderstanding of systemic poverty. There were a number of times throughout the season where people would make comments like ‘Why would you still have all the old furniture from your last marriage?’ or ‘you get all your clothes from goodwill?’ or even just missing the importance of things like ‘I’m moving because I have been priced out of Atlanta’. While there is that raw humanity on the show and the makeovers are wonderful, there is an underlining sense that they missed the larger systemic factors at play that a French tuck just won’t fix. Now, there was a reason I mentioned apparently before and that is that there is a very good chance that this all happened but was cut in the edit, when you are taking a shot that is shoot over a week and cutting it into an hour things will get lost and this might have been one of them. 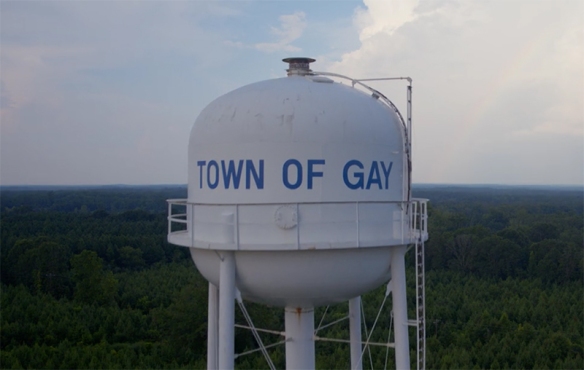 How else do you start a season of Queer Eye, but by visiting the Town of Gay. Image Credit: Netflix

In the end, do we recommend Queer Eye? Yes, we do. Look yes, there are some issues with the show, but that does not change the fact that it is a deeply emotional show, and that there is a pure joy you get when you see everything that happened during the week get brought together in the final moments. Also good god would I like a suit to fit as well as every suit in this season.

Have you seen Queer Eye yet ?, let us know what you thought in the comments below, feel free to share this review on any of the social medias and you can follow us Here. Check out all our past reviews and articles Here, and have a happy day.