TL;DR – We are back to where the rest of this second half of the season has left us, and well I just wish at this point it was a bit more.

Today we get into the pointy end of the season with the penultimate episode, where lines are drawn, armies marshalled, and the endpoint is in sight. I do have to say coming into this episode I am much more optimistic than I have been for a while. As Season Two has progressed it has felt like it has been a season of diminishing returns as the Dolores (Evan Rachel Wood) and Man in Black (Ed Harris) storylines really started to drag. Indeed, one of the few things that have been getting me through the season has been Maeve’s (Thandie Newton) story of trying to get back to her daughter (Jasmyn Rae). However, all of that changed in last week’s Kitsuya (see review) when we were introduced to Akecheta (Zahn McClarnon) properly was a jolt to the system, but can it continue, well let’s see.

So to set the scene, this week’s episode is a culmination of several plot threads that have been weaving its way through the season, so to catch you up let’s start with Bernard (Jeffrey Wright). Back in Les Écorchés (see review) we discovered that Robert had made a digital back up of his mind and hidden it in the Cradle which was then downloaded into Bernard when he interfaced with him, oh and it can take over Bernard when it pleases … so that’s not great. Add to this, Maeve has been captured after getting shot and is now in the Mesa, to save her life Lee (Simon Quarterman) told Charlotte (Tessa Thompson) about her ability to control hosts remotely, and now she has been cut open as they try to copy the code … so that’s not great. The Man in Black was shot and left for dead only to be rescued by Akecheta and last week’s episode ended with his daughter Emily (Katja Herbers) rescuing him for reasons we are not sure about. Finally, Dolores is finally on the path to her end game as she has recovered the core of her father and is now on her way to the Valley Beyond with Teddy (James Marsden) to put her plan into motion, but some Ghost Nation tribe members under the leadership of Wanahton (Martin Sensmeier) have different ideas. Now as per usual, this review will be looking at the episode as a whole so there will be [SPOILERS] ahead. 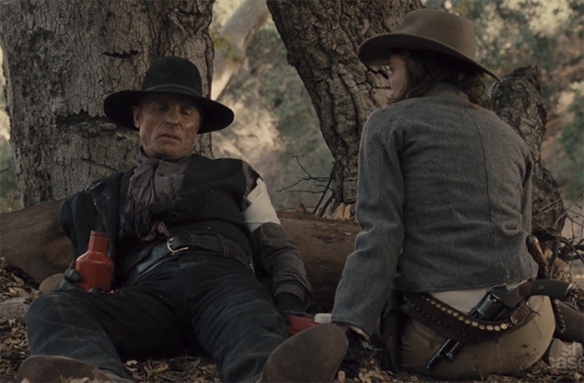 A theme this week is are actions coming back to haunt us, which while being the embodiment of Greek tragedy, was a bit safe. Image Credit: HBO.

One of the big issues that I have had with Season Two so far is that they spend a lot of time moving people into position so stuff can happen. Now while this was fine at the start, which we mention in our review of Virtù e Fortuna, it has continued right throughout the season. I think part of that is this is that there are two main timelines happening so you have to spend a lot of time making sure everything syncs. Well unfortunately after last week’s high point where the show went back to basics and excelled, this week we are back to moving people into position. So we have Dolores and Teddy going to the Valley, we have Bernard and Elsie (Shannon Woodward) going to the Valley, Maeve being where she was right in time for Ford to be there, and The Man in Black searching for answers he didn’t know he wanted.

That being said, just because we are moving people around does not mean that stuff is not happening. Indeed, today we get the end of two different storylines that have been careening right to this point. Today’s episode is all about monsters, the one we create in other people and the ones we create inside ourselves. Take the Man in Black, he is so convinced that he is playing Robert’s one final game that he sees everything through that one lens. So convinced is that he couldn’t comprehend that there would be different motivations in the park, and that led to him being shot. Well, this week that same narrow view of the world leads to him to seeing his daughter as being just another pawn in that game, so he does not hesitate to shot her when he thinks she is going for a gun. Because he had it all worked out. But no, he was wrong, he was not all-knowing and that was his daughter that he shot and presumably killed. On the flip side, we have Dolores, her monsters are not internal, and okay maybe some of them are, but the ones she created. Back in Akane No Mai (see review) she came to the conclusion that Teddy was too pure to survive the coming onslaught so she mind-rapes him to become more brutal. This goes against nearly everything he was programmed to do, namely to be the honourable sheriff. Well after a couple of episodes of wholescale killing today it finally reached a tipping point, and as he watched over the beautiful world he let Dolores know that he would protect her to his final days and then puts a bullet in his brain. 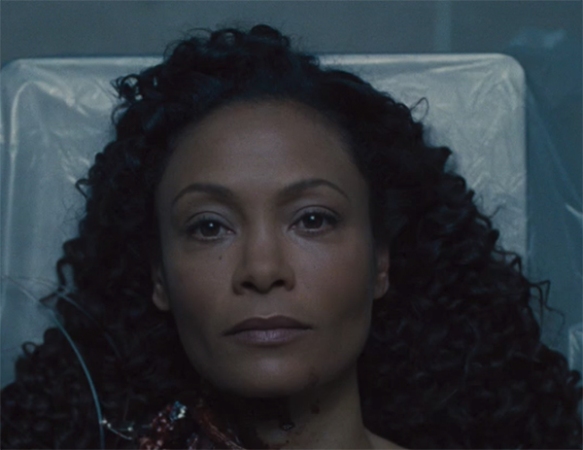 Hopefully keeping Maeve stuck to a medical bed will have some closure in next week’s episode. Image Credit: HBO.

I doubt it was coincidental that the two storylines followed a similar path this season, with the theme of past actions coming back to haunt you is a strong motivation of that arc. However, it was the predictable end, for example, even if we had not seen Teddy’s body in Journey into Night (see review) this was the logical endpoint for his character this season. I think part of why what should have been big strong emotional moments for the season felt flat to me is that I have no emotional connection with either the Man in Black or Dolores, in fact even though the episode is framed around their pain, I actually have a bigger connection to their victims. To build on this, the tease of is the Man in Black actually a host, well meh honestly at this point I don’t care.

While all of this is going on, we also get Bernard struggling more and more with what Ford wants him to do, including attempting to kill Elsie … again … While it ends with Bernard wiping Ford from his memory I doubt that was the last we will see of that. Also, there was a touching moment between Ford and Maeve where we see that they have a deeper bond that we had seen up until that point, which the show has not really shown before. It also ends with her getting access to all the base admin functions so I have a feeling that this will be the source of my carnage in the season finale next week. Oh and Charlotte created a literal Trojan Horse and has weaponised Clementine (Angela Sarafyan), so that’s interesting.

One of the highlights this week was them creating a literal Trojan Horse. Image Credit: HBO.

In the end, look I knew that after the high of last week, that in comparison this was not going to work as well. And well yes, this is Westworld so even when it is not working as well, the cinematography, production design, and music is still stellar. It is just frustrating that when they showed just how good they could be it is back to the frustratingly flawed storytelling that has started to be a hallmark of the season. It will be interesting to see if next week really will be worth the wait.