TL;DR – As we move towards the end of the season the different timelines have started to fall into place and I can see the heart of the story it wants to tell, but I don’t know if I am in for the ride to the end.

At the end of last week’s Phase Space (see review) I was beginning to wonder how all the timelines crashing together was going to work given what we knew already this season and I postulated that there must be either multiple copies of some of the hosts or that the timelines were not adding up. Well today in Les Ecorches we discover that I was both wrong and right, as we find out that there were two different occupations of the Mesa that included Charlotte (Tessa Thompson) and Ashley (Luke Hemsworth) that had been spliced together, however we do discover that someone has had a couple of clones made, so part marks? And as always a reminder that we will be looking at the episode as a whole so there will be [SPOILERS] ahead.

So to set the scene, at the end of last week’s episode the big reveal was that Robert (Anthony Hopkins) still lived after Dolores (Evan Rachel Wood) blew his brains out at the end of Season One, well sort of. We know that they have yet to perfect physical creations of hosts using humans as a basis, but here it seems that is completely fine as long as he stays in the digital world. While all this is happening there is an explosion as Dolores, Teddy (James Marsden), and the gang storm the Mesa, their aim is to get back Peter Abernathy (Louis Herthum), and destroy the Cradle, which is a problem because that is right where Bernard (Jeffrey Wright) and Elsie (Shannon Woodward) are. Meanwhile, Maeve (Thandie Newton) has been separated from the rest of her gang as the Ghost Nation attacked the farm where she was meeting her daughter (Jasmyn Rae) and things go from bad to worst thanks to Lee (Simon Quarterman). 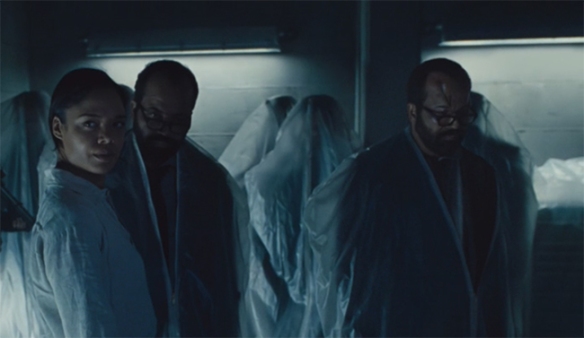 Now reading the feedback to the season online so far it is clear that a lot of people have not been digging Season Two … to put it mildly. I for one have mostly been enjoying it because I have been captivated by Maeve’s hunt for her daughter and it has been really interesting to see how her experience of being awoken is very different than Dolores. As well as this, I’ll be happy to watch Tessa Thompson in anything and bringing back Shannon Woodward was a great decision. Westworld is one of those shows that reveals its hand very slowly only to hit you with a 2 by 4 by the end, which is half the charm. However, as the season has gone on and the focus has become more and more on the Man in Black (Ed Harris) and Dolores, and it becomes more and more clear that I don’t care about Dolores’s mission or the Man in Black’s game it has started to wane, and today’s episode is no example. Add to this the timelines making everything frustrating, I have been becoming less interested to see where this is all going.

While a lot of the show is becoming frustrating there is a core to it that is still compelling enough that I do really want to see how it ends. For example, I’ll be here to the last episode just to see how Maeve’s quest ends, though it might be ending prematurely if she does not get immediate help soon after being gunned down by a response team called in by Lee, Lee you royal arse. Also as much as it is frustrating, I am still slightly interested to see what the big mystery is in the Promised Land. As well as this, I don’t think many can deny that having Anthony Hopkins back full time, after some cameos earlier in the season, immediately lifted the episode. Every line he delivers is full of purpose, menace, and concern, hell he goes through the full gamut of emotions.

Good to see you back Anthony Image Credit: HBO

Now clearly what this episode will be known for is the attack on the Mesa, and the carnage it took in its wake, and for me some of this really worked but a lot of it didn’t. So before we start I did like the little dive into the Cradle and Robert’s realm, because it took us all the way back to the first episode to remind us how far we have come, which was needed because some carnage is about to hit. In the space of a couple of minutes, we see Clementine (Angela Sarafyan) gunned down and Angela (Talulah Riley) sacrificing herself to explode the Cradle. While this is going on Maeve takes down and possible mortally wounds the Man in Black, leading to Lawrence’s (Clifton Collins Jr.) death. Now for a moment, I was sitting there shocked as the carnage erupted and the response teams were surgically wiped out. However, the climax of this all was Dolores threatening Charlotte and Ashley which immediately lost all the tension because we already know they survive the assault. Also, I don’t know what it was but I didn’t feel any real emotion as Dolores and Peter said goodbye to each other. It was really well acted by Evan Rachel Wood and Louis Herthum, and I am usually a sucker for that big emotional moment but nothing came of it.

In the end, look I think we are at the part of the season that we need to have some momentum to the finishing line, and while the addition and chaos of Anthony Hopkins is a good step in that direction it needs more. However, it was the end of the season last time when [redacted] started hitting the fan and we still have a couple of weeks for them to really change it up.