TL;DR – Kerblam! Is a return to a more classic Doctor Who episode filled with conspiracy, murder, missing people and a call for help, oh and also a fez, can’t forget a good fez.

There has been a lot of discussion regarding this season of Doctor Who and while I have really been enjoying it, there are others where Chris Chibnall’s writing style is just not jelling with them, which is perfectly fair. What will be interesting to see is how people engage with the show in the back half of the season because now all the shows have different writers. We saw that last week with the Demons of the Punjab (see review) where the show talked a deeply problematic time from Brittan’s past with grace, and this week we have a different take as we delve into what I would consider being a more classic Doctor Who episode where conspiracy runs rampant.

So to set the scene, the gang The Doctor (Jodie Whittaker), Graham (Bradley Walsh), Ryan (Tosin Cole), and Yas (Mandip Gill) are riding through the time vortex in the TARDIS when they are being chased by something. Thinking it was hostile, I mean what else would try to get a TARDIS in flight, they try to get away from it until The Doctor realises what it is. It’s a Kerblam! delivery man (Matthew Gravelle), think Amazon but on a galactic level, where their automated delivery robots teleport the goods right to you. So, one oversized fez later and all it right with the world, except on the delivery receipt there is a simple message ‘Help Me’ and that is all The Doctor needs to whisk off to the Kerblam! headquarters to see what is wrong. Now as always we will be looking at the episode as a whole, so there will be some [SPOILERS] ahead. 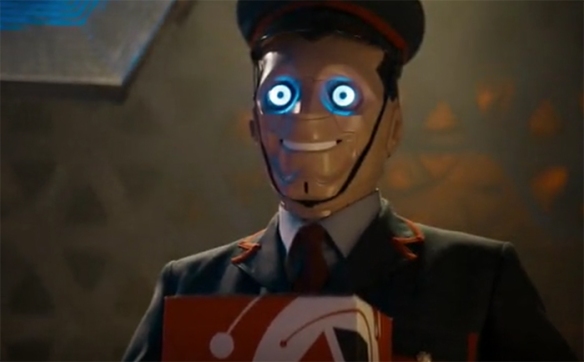 As we said last week it is good that we are starting to see episodes which make use of the whole ensemble, and we see that here today as well. Because as the gang arrives they are quickly separated into different roles, The Doctor and Ryan in processing, Yaz in procurement, and Graham in the Janitor’s department. This gives them all a moment to shine, and also bond with the other workers like Dan (Lee Mack) who is here so that his daughter can get a better education and not wind up working in a factory like him, or Kira (Claudia Jessie) who is just happy to have a job in a world where automation has reached a point where there needs to be a governmentally mandated 10% organic workforce. This helps everyone feel like they have a purpose in the episode in discovering what is at the heart of the conspiracy. Also, we get to see a bit more of Ryan’s story, as he is a warehouse worker back on Earth, so he takes the lead as the person with the most hands-on experience.

One of the great things about this episode is the design of all the features that have to look both futuristic but also something that we can relate to. So the delivery men that look like something someone would make that is very much ensuring that they remain deep in the Uncanny Valley, which makes sense from a business perspective. Also, no matter how far in the future you go, warehouses, especially ones which have human involvement, pretty much will look the same. It was also an episode where all the supporting cast really did shine. You had Judy Maddox (Julie Hesmondhalgh) who is the head of organics which is a difficult job, but you can tell that she does really care for everyone who works there. Or Jarva Slade (Callum Dixon) who is the perfect duplicitous executive that you can’t tell if he is in on the conspiracy or not. 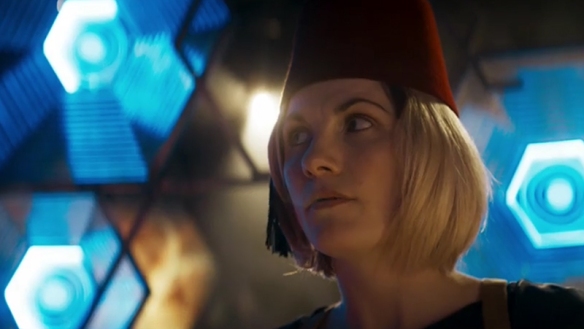 I do love a good fez. Image Credit: BBC

Because of this great groundwork, the story is able to develop at its own pace, I did really enjoy all the twists and turns that got us to the ending. You have the call to adventure, the drive of The Doctor to always help someone in need, missing workmen, the cold mechanical robots that look like they will be the bad guys, people who you are not sure if they are the villains or not. All of this creates a real drive behind the story as the conspiracy unravels and we see who really is to blame, and while I did enjoy the story I don’t think it quite stuck its landing.

With this episode, I was reminded of an episode from the first season of The Orville (see review) where they explored a planet where social media has become almost a government structure in its own right. It is an interesting scenario that is shedding light on the world we live in today, but it does not quite know what it is that it wants to say. Automation is a force that has the potential to radically change the world we live in, and if you want to know more this video from CGP Grey can give you a good primer. So the government stepping up to mandate an organic workforce is an interesting idea that is one possible outcome. However, as the show goes on, it feels a bit unclear as to what it wants to say about automation, or how big distribution companies like Amazon treat their workers, which is a shame. This is not helped but a lot of hand-waving away of things like Charlie’s (Leo Flanagan) skills, or if the system is sentient or not. 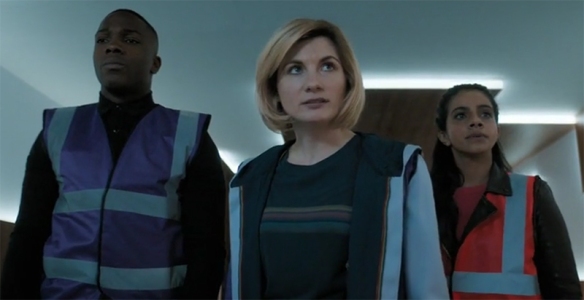 Oh that’s it, you have gone and gotten the gang angry. Image Credit: BBC

In the end, do we recommend Kerblam!? Yes, yes we do. Now while it does not stick the landing, it was a fascinating episode up to that point, with interesting characters, a couple of sly nods to the past and some great Graham moments.

Have you seen Doctor Who yet ?, let us know what you thought in the comments below, feel free to share this review on any of the social medias and you can follow us Here. Check out all our past reviews and articles Here, and have a happy day.