TL;DR – While at first look this might have been just a Star Trek homage or at worst a blatant rip-off. Instead, it finds its feet and becomes a charming exploration of the future and the mess and opportunities that could come.

I have been wanting to catch The Orville for quite a while but there was no streaming or TV that picked it up here in Australia, so I was expecting this was something that I might only get to see when it dropped on Blu-Ray. But with SBS announcing they had picked it up and would be showing Season Two I jumped on a watched the whole first season in one night, which meant that clown appeared at a very confronting time late at night. But binged the first season I have, and now it is time to jump in and see if it was worth the wait. Now before we dive in, a quick reminder that as we will be looking at the season as a whole, there will be some [SPOILERS] ahead.

So to set the scene, it is 2418 and Earth is at the heart of the Planetary Union a collective of races exploring the galaxy together. We open up on New York as Ed Mercer (Seth MacFarlane) a member of the Planetary Union’s space fleet drives across the shining skyscrapers and raised park lanes and arrives home just in time to walk in on his wife Kelly Grayson (Adrianne Palicki) engaged in sexual relations with Darulio (Rob Lowe) an alien that shoots blue liquid out of his face. One year later and Admiral Halsey (Victor Garber) is ready to give Mercer his first command, but given the past year it is likely to be his one and only shot to command a starship, and he is only been given the command of the USS Orville a mid-sized vessel used for exploration. It has a crew featuring members from species across the Union, and oh, just one catch the first officer is his now ex-wife Grayson. 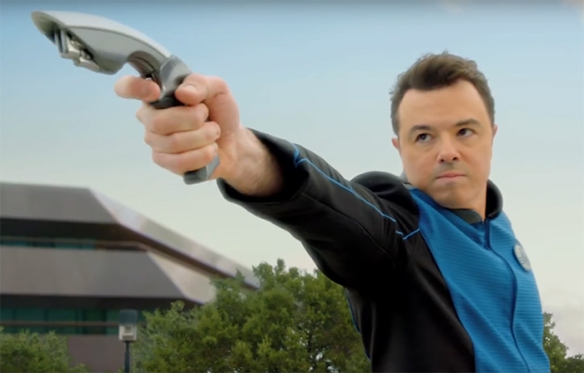 As both creator, writer and star, a lot of the show is built around Seth MacFarlane’s character. Image Credit: 20th Century Fox & Fuzzy Door Productions.

I did have some concerns going in that this would just be a riff on Star Trek in a similar vein as Seth MacFarlane’s Blue Harvest take on Star Wars and to be fair there is some of that there. For example, in the first episode Old Wounds they go out of their way to feature seat belts in the shuttle, one of the oft-mentioned criticisms of Star Trek, or in Majority Rule where Lt Alara Kitan (Halston Sage) sports a familiar head adornment. As well as this, as the first season progresses they do feature some stories that you can draw parallels in for Star Trek like Orville’s Mad Idolatry and Trek’s Blink of an Eye. But this was not a problem for me, because they take the concept in different and interesting ways, as well as this, Star Trek doesn’t have the moral high ground in reusing story plot threads, I’m looking at you Oasis. On the one level, this is the world of Star Trek where the replicators can make edibles as well as Earl Grey Tea, Hot. But it is also an exploration of themes that shows like Star Trek don’t often discuss and in a thoughtful and compassionate way I honestly was not expecting.

One of the things I did appreciate was just how willing every member of the cast was in committing to their roles, which meant that you were able to walk that fine line between drama and comedy. This is important because with some of the story beats you could have very easily fallen into caricature or worse. I think the highlight for me was Into the Fold where you had two characters that had been supporting the crew’s adventures thrust into the spotlight. You had the AI Isaac (Mark Jackson) that comes from Kaylon who believes he is superior to everyone else suddenly forced to be the caretaker to two young boys, and we also see Claire Finn (Penny Johnson Jerald) a doctor and caregiver, straight up kill a dude because he was stopping her from getting back to her kids. This is probably a good time to mention that Penny Johnson Jerald is one of the unsung heroes in the world of acting and should be on more people’s radar because she is always giving an amazing performance. A lot of the show is based around the rapport of Seth MacFarlane and Adrianne Palicki and this is also deeply engaging after they move from antagonistic sneakiness of the first episode and start working together. Indeed, where the show excels is in the banter between the cast, as it feels like what would happen because it is what happens in any workplace.

Another highlight for me was the production design of both the ship and sets. There is constant design language used in all of the Planetary Union’s creations form the uniforms, to the ships, and how the sets work. All of this flows from the engine design which gives the USS Orville some interesting curved lines but also a sense of verticality that was played on in New Dimensions. You also see that play out in the use of spiral staircases in parts of the ships and the curved lines in the bridge design. All of the sets have been made with a real eye to detail, and while they do use the technique of blending practical and digital sets, I did like that many of the sets have a tactile feel to them, and many of those sets would have taken up quite a bit of space on a soundstage. This ingenuity also extends to the design of the many different aliens that make the Orville their home. While this doesn’t often extend to the aliens of the week, it was good to see this grow throughout the season. Also, I do have to give a big shoutout to the musical score that was used throughout the season. There was a time when I walked out of the room and just the music was playing and I was transported back in time to my youth, going to Blockbuster and getting new episodes of Voyager out on VHS. Being able to evoke a musical style of the past without just ripping it off is a tough act to pull off and they do it so well here.

In the end, do we recommend The Orville? Yes, yes we do, it takes an episode or two to find its feet and it ends on an odd note, which is not a problem because we get Season Two in December. But it is also a well produced, well-acted, and often times insightful show that explores issues relevant to the world we live in today, like any good Sci-Fi show. I really enjoyed my time here, and can’t wait to see where they go now.

Have you seen The Orville yet ?, let us know what you thought in the comments below, feel free to share this review on any of the social medias and you can follow us Here. Check out all our past reviews and articles Here, and have a happy day.

8 thoughts on “TV Review – The Orville: Season One”