TL;DR – Today we learn that even when people are not the worst, they can still disappoint you 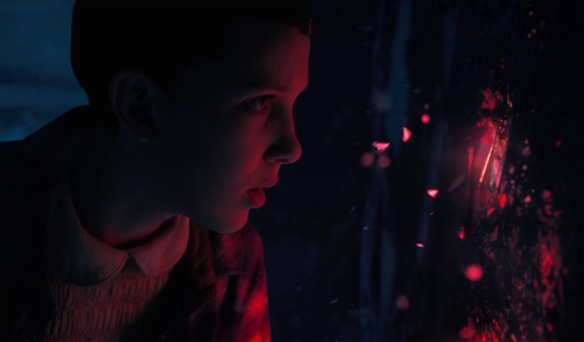 The cinematography in this episode was fantastic

So in the last episode, MADMAX (see review) ended with the big reveal that Eleven (Millie Bobby Brown) is now living in a cabin in the woods with Sherriff Hooper (David Harbour). Well, this week we kind of see how they ended up together as we open with Eleven moments after she defeated the Demogorgon at the end of Season One (see review). I was wondering how long she would be stuck in the Upside Down World, and it turns out it wasn’t long at all, but long enough to get separated with the team as the government cover-up begins. Mike’s (Finn Wolfhard) family is surrounded by government agents, and even though he refuses to give Eleven up, she has to run, surviving in the woods. There is something deeply sad that the person that just saved the town, if not the world, is forced to flee and become homeless because of the actions of others.

As well as learning a bit about Eleven, we also get to see a brief look into the lives of two of the new characters this season, brother and sister, Billy (Dacre Montgomery) and Max (Sadie Sink). Billy is the very epitome of the dudebro, he is desperate to prove how superior he is to everyone around him. Even though he clearly states that he doesn’t care about the town or the people of Hawkins, and he seems prepared to hurt people just to get his way. Max is the more interesting character because there is more depth to her.  Clearly, something has happened that has forced them to move from California to Indiana, and there is some debate as to whose fault that is. However, while Billy is just raging about the situation, Max is trying to find her place in the new town.
The big theme of this episode is ‘how do you go on with your lives’ as the one year anniversary approaches it is not just Will (Noah Schnapp) that are feeling the weight of what happened to bring them down. Joyce (Winona Ryder) still struggles to let Will go live his life, but you completely understand where she is coming from. Nancy (Natalia Dyer) desperately wants to tell Barb’s parents the truth, it is the noble thing to do because they still think she is alive, but it could also destroy her family. Mike is deeply missing Eleven who is confined to the cabin, so he sees Lucas (Caleb McLaughlin) and Dustin’s (Gaten Matarazzo) attempts to add Max to their group as a kind of threat to her memory. However, while this is all going on, a very real threat is emerging, and like the monsters of the past, the first sign is failing crops.

And yes the Ghostbusters costumes were really cool

While Trick or Treat, Freak is another setting the scene episode, it was still fascinating. This is because the cast is willing to go to those emotional depths that are needed, and with such a young cast it is amazing to see. It is also clear that the penny that has been arcing through the air is about to drop, and this is going to be the calm before the storm, why, well maybe Hawkins National Laboratory should stop poking an inter-dimensional portal to a realm where the indigenous life forms can just wreck stuff up, if you punch a wasp nest don’t be surprised if you get stung.

Have you seen Stranger Things yet ?, let us know what you thought in the comments below, feel free to share this review on any of the social medias and you can follow us Here. Check out all our past reviews and articles Here, and have a happy day.