TL;DR – This first episode is like watching an oncoming storm approach. It is beautiful but also full of trepidation as it unleashes its torrent.

What is life? It is a question as old as time itself. Were we created? Did we evolve? A little of both? Well in this week’s episode we take a look at some of those questions when the created become the creators and the created fight back. While Journey into Night (see review) had to do a lot of setting up to get the season started again, Reunion doesn’t have that baggage and as such it barrels full steam ahead into the season.

So to set the scene, at the end of last week’s Journey into Night we learned a number of key things, first that we are split between the Revolution Timeline (RT) and the Two Weeks Later Timeline (TW). We know that Bernard (Jeffrey Wright) is badly damaged, but he also survives the two weeks with no sign of Charlotte (Tessa Thompson). We know that DELOS is trying to clean house with Karl Strand (Gustaf Skarsgård) leading the charge. Maeve (Thandie Newton) is still hunting for her daughter, using every skill she has but is this still a programmed story or not? Finally, we know that the Man in Black (Ed Harris) and Delores (Evan Rachel Wood) have been let loose on the world, and there is carnage in their wake. The one thing that is for sure is that that ending pan means that for at least one character, the two weeks later were two weeks too late. Well, this week adds two new timelines to the mix as we look at both before the park opened (BT), and the time after the past timeline from Season One (SOT) where William (Jimmi Simpson) is consolidating his control over the business before he becomes the Man in Black. This week we continue looking at the chaos of a park that has gone off script and the damage that does, but that might not be the most dangerous thing out there in the park waiting to come out. Now, as we move forward we will be looking at the episode as a whole so there will be some [SPOILERS] ahead.

So much story conveyed in just a single facial expression. Image Credit: HBO

The main thing I took away from this episode was just how great some of the acting is and how we are really seeing some of those amazing casting choices really pay off. For example, we have Teddy played by the amazing James Marsden. In Season One he was the earnest sheriff trying to find his love Delores and everything that meant. It was a great role but it was one of the more straightforward ones in the great scheme of things. In this episode Teddy is faced with his whole world being a lie, but not only a lie, a lie he can’t comprehend. As well as this, he is also faced with the reality that his love Delores might not be the same person he fell in love with. All of this is wonderfully captured not in words but in a single facial expression from James and it is phenomenal. On the other side of the equation, we also have the opposite, instead of the main cast member we have someone who is literally in a single scene and what an impression he makes. Giancarlo Esposito is one of those actors that makes everything better just by being there, and even though he is not there for long everything he said had weight and the moment he died it was like a long time character had bit the dust, and to make that kind of connection in such a short amount time is quite a skill.

As I alluded to in my opening one of the key themes here that were touched on in the first episode and really brought to the foreground is the creation turning on the creators. Now, of course, we saw that literally happen at the end of last season but here we see that the endpoint does not stay within the realm of the parks. For the first time that I know off, we actually go outside the park for a good chunk of this week’s episode. We see how Robert (Anthony Hopkins) and Arnold (Jeffrey Wright) first pitched the park to Logan Delos (Ben Barnes) (yes that Delos which was a surprise to me). This shows that Delores had actually been out of the park before but more importantly she remembers everything, everything she has seen everything she has heard, even when supposedly in shut down mode. She knows about the world outside and as Logan mentions to her in a drugged up state he was left in at the end of Season One “we lit the match” to the fire that is going to burn us all down. This with all the interesting religious interplay created an interesting weight to the episode. 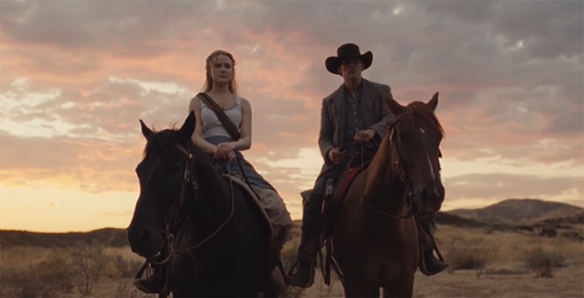 Finally, it was an episode called Reunion, so in what way was it a reunion? Well in a couple of ways some more straightforward than others. Of course, we are reunited with characters and storylines from Season One that I didn’t expect us to be jumping back to again in Season Two. As well as this, we also get the meeting of Delores and Maeve who cross paths on their respective quests, and all is not completely fine between the two. Indeed, as the season progresses I have a feeling that this might be one of the brewing conflicts and both have very different views as to what free means. Teddy gets reunited with his memories even if he can’t process them, and The Man in Black gets reunited with Lawrence (Clifton Collins Jr.) and discovers that Robert has left more than a few surprises for him. All of these meetings worked on two levels, it was great to see the interactions, but each one also promised the danger that is to come for all around.

In the end, Reunion continues the strong push this season moving forward, indeed we haven’t even talked yet about how great the music and visuals are, ok one quick side note, but damn does this show know how to capture a sunset. However, what this episode shows is that there are levels to this world that we had no idea existed, and that Westworld, and all the worlds might actually be just as damaging for the guest as it is for the hosts.