TL;DR – It is the second half of the season and finally the timelines are starting to crash into each other in interesting yet not completely clear ways

One of the things Westworld is known for is its many intersecting storylines and timelines, and Season Two has been no exception up until now. We have the story of Dolores’ (Evan Rachel Wood) rebellion as she builds an army to possibly take over the world, also Maeve (Thandie Newton) and her hunt to find her missing daughter as she puts together a ratbag team to help her, we have the Man in Black (Ed Harris) trying to get to the heart of the final narrative Robert (Anthony Hopkins) planned for him, and then we also have Bernard (Jeffrey Wright) whose history database got messed up by the head shot and so we see him jumping across different timelines. Well in today’s episode we not only get all of these stories we get them just as timelines come crashing together … maybe.

So to set the scene, at the end of last week’s Akane No Mai (see review) our two main leads have put themselves on two very different paths. With Dolores, she showed that she was willing to kill everything even the ones she loves the most to get to her end goals as she has Teddy (James Marsden) for all intents and purposes mind raped into submission. While in Shogun World we discover that Maeve has an ability no one knew about, she can control hosts without verbal commands which she uses at the end of the episode to cause an army to kill themselves. This week we start up right where we left off last week as some order is brought to Westworld … maybe. Now as always we will be looking at the episode as a whole, so there will be [SPOILERS] ahead for the episode. 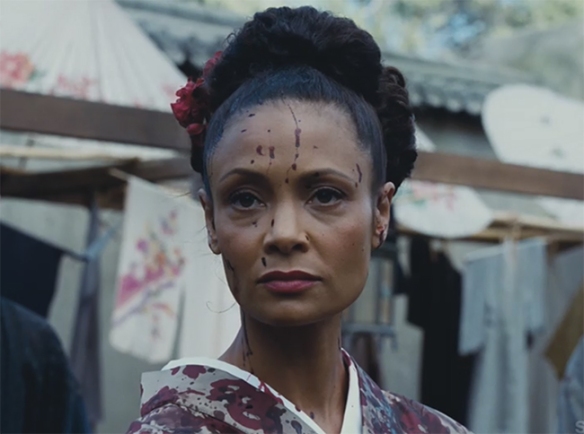 Everything that Thandie Newton does is pure gold

If you have read my reviews in the past I think it would be safe to say that you know that I have been a big fan of Ramin Djawadi’s work as the composer of Westworld. One of the hallmarks of his score is the way he takes popular songs and reinterprets them into this new setting for example in Virtù e Fortuna (see review) where he changed up Seven Nation Army to fit The Raj, which you can hear here. Now while these reinterpretations have had a lot of exposure in popular culture, and rightly so, I want to take a moment to look at all the original music that Ramin also composes for the show, and today’s episode is a perfect example of this. A number of times throughout the episode the director chose to have emotional moments play out with no dialogue with just the emotions of the actor’s portrayal and the musical accompaniment. Now yes, a lot of what makes these scenes work is the skill of the actors, and I have to give full props to Thandie Newton and Rinko Kikuchi who plays Akane for hitting those emotional moments. However, the other big factor in that scene is the soring strings that Ramin has added that perfectly complement the scene, and create an emotional moment without the need for dialogue. This has happened all over the season and Ramin is truly one of the best working in his field at the moment.

When it comes to emotional beats I also want to take a moment to talk about James Marsden’s performance this season. Oh, poor Teddy it was almost destined that he would get left behind by Dolores as he was not awakened like she was, indeed we saw the outcomes of that in Journey into Night (see review). So all season up until this point he has been playing a character in deep conflict with itself. On the one hand, everything that Dolores is doing is repugnant to him and his morals (programmed or not) but he is also deeply in love with her (programmed or not). So how do you rectify such a deep conflict within yourself, well Teddy didn’t have a chance to find out because sensing this conflict Dolores decided to take pre-emptive action and artificially changes his personality. Well, this is the first week where we see this changed Teddy and to see a character go from loving to hard is such a big 180° shift, and it fantastically delivered by James. It is not just his tone of voice, it is the mannerisms that he used and the way he talks. It is almost a completely different character, and hats off to James for pulling it off.

Huge props to James Marsden for pulling of such a big character shift. Image Credit: HBO

There is one thing about this episode that I’m not entirely sure about and that is how all the timelines are coming together. Now, I do want to preface this with a quick comment that I don’t know what the rest of the season holds, so some of this might get worked out, or indeed some of this confusion might have come from me missing something, if so please let me know in the comments below. However, as it stands at the moment I can’t see how the timelines crashed into each other in this episode. So the way it played out is that we know Charlotte (Tessa Thompson) captured Peter Abernathy (Louis Herthum) and brought him to the Mesa. Ashley (Luke Hemsworth) met up with Karl’s (Gustaf Skarsgård) team at the beach after escaping/being helped by the Ghost Nation who made their way to the Mesa, where they met up with Charlotte. Charlotte then called in the cavalry who only arrived because she had Peter, and Ashley met them as they landed, when inside they finally got the map open to discover that the train was coming which Dolores and Teddy and their team loaded up with explosives. But we have already seen that Teddy’s body was fished out of the sea by Karl’s team before this, so at the moment as it stands it does not makes sense unless there are different copies running around. To add to this we also have Elsie (Shannon Woodward) arriving with Bernard but then Bernard is also already there if the explosion they hear is also the train (though this might just be a red herring). So as it stands I am completely confused as to how all of this lines up, and Bernard’s jumping through time is not helping.

While there are some frustrations I do want to say that I really love all the little details that the show put into this week’s episode. So while we do leave Shogun World a bit earlier than I expected, this week we got to see it in all its beauty with some beautiful matte paintings. As well as this, Shogun World continued to have the best action that we have seen in the show so far, with an exhilarating samurai duel. To add to this I really love the detail of when Bernard went into his head and the aspect ratio changes and the colour palate of the lens shifted to be more in style with the classic spaghetti westerns of years gone by. 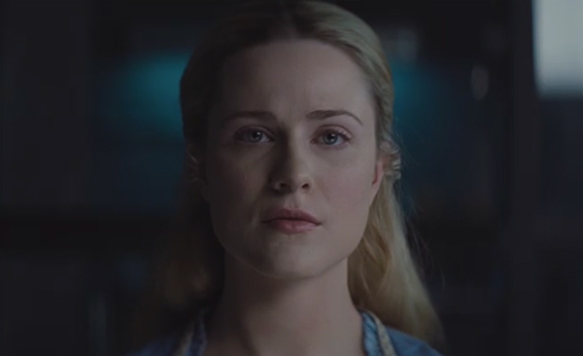 It will be interesting to see how the opening scene fits into the already complicated timeline of the show. Image Credit: HBO

In the end, do we recommend Phase Space? Yes, we do. Look while it is frustrating that the timelines don’t make much sense and that they keep trying to humanise the Man in Black. However, when the show is working it is some of the best on TV and frankly, everything that Thandie Newton is so good that I think I would watch the show just to see her give a masterclass in acting.