TL;DR – Stepping into the storied world of 4x, Stellaris takes us into space and taps into that love of exploration among the stars … or just conquering everything you see, with deep systems that give you the kind of customisation that you need in a empire building game.

Strategy games are my jam, I love building up an empire, mining all the minerals, spawning all the Overlords, launching all the nukes. As well as this, I am a huge sci-fi fan, so when you add a strategy game, to a space setting like Sins of a Solar Empire, Birth of the Federation, or Space Empires 3, well then you are on to a winner. However, while I had picked up Stellaris back when it first came out it didn’t quite gel with me but recently I took another shot at it with the Utopia and Distant Stars DLC and found that ‘one more turn’ grove. So now that I have played a couple of games of it, including some multiplayer, I have a better idea of the game and feel confident in my review.

So to set the scene, Stellaris is if you want a technical description is a real-time 4X Sci-Fi strategy game. Now, what does that all mean well, it is a 4X strategy game which means it is an empire building game based on the mechanics to “explore, expand, exploit, and exterminate” and unlike many within the genre like Civilization, it is real time rather than playing turn by turn. This means that everyone is moving and acting at the same time, instead of one by one, which makes it all a bit frantic, until you remember that you can pause. 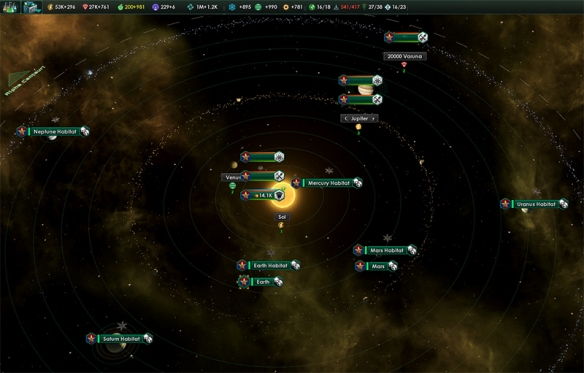 One of the areas where Stellaris shines is in all the small details, like the make up of the Sol System. Image Credit: Paradox Interactive

The first thing that you see when setting up a game is just how many options you get when creating a race to play with (and indeed you can just use one of the pre-made ones which I do recommend for your first time). This means that you can customise your race to play just about any way you want, do you want to be a pacifist xenophobic race, sure, or a gestalt conscience, have at, or militant spiritualist, I mean it is a bit on the nose but the option is there. I made my race to be egalitarian, materialist, xenophiles, who are beacons of liberty with an efficient bureaucracy. This choice is right through the game, do you want to play wide and conquer your neighbours one at a time, or do you want to play tall and close yourself off populating all your systems with megastructures? Do you want to win through violence or through building federations to span the galaxy? Any of these options are viable in the game.

This is also a game where it is clear that a lot of work has gone into getting the small details right, for example when you open up the Sol System everything is there (goodness is that my jam). You have a variety in the solar systems with trinary systems, black holes, pulsars, asteroid belts, or leftover remnants of long-lost civilizations. This detail also extends into the art design. When you open up the game you are greeted with some of the concept art for the game which often times does can give an overly optimistic view of the final product. But here, that moment that you build that Dyson Sphere has the same feeling as you see in the art. The solar systems are all teaming with little details if you want to zoom in and see. This also stems to the design of the spaceships which are also heavily customisable, and there is the joy that happens when you see two massive navies smash up against each other.

Do you win the game through peaceful federation building, or violently conquering the galaxy, well the choice is yours . Image Credit: Paradox Interactive

The same flexibility also exists when it comes to the gameplay, do you want to play at a leisurely pace, or do you want to play oscillating between paused and ultra-speed, either is fine. You can shrug off building massive navies and instead create great starbases at strategic locations and watch your enemies send waves of ships crashing into them. You can make a beeline through the science to a specific technology and then say bypass an enemy’s defences with a wormhole and be attacking their capital before their fleets can make it back in from the fringes of their empire. However, while this customisation in everything is a great feature, it also means that there is a lot of to learn, and you will likely lose your first couple of games for things you didn’t know about. There are also these clever little roadblocks throughout the game like fallen empires, that time you activate the L-Gates for the first time and realise what a mistake that was, also some end-game crises, that keep the game from becoming too predictable and to stop anyone from running too far ahead of the pack. Also even now after playing for as long as I have I still have not got the balance of being able to field the size and scope of fleets the AI can without my economy imploding, and while there are some other things like this, I am not sure if they are issues with balance, or if I have not quite mastered the mechanisms yet. Oh pro-tip, never let your AI allies be the driving force in any war because they never seem to know when to just go for a white peace. I do quite like the DLC model that Stellaris has implemented, but I think the price point for some of the DLC is a bit high, but that is likely just a personal thing.

In the end, do I recommend Stellaris? Yes, yes I do. I’ve been having a lot of fun learning all the systems and building a federation that spans the galaxy. It has also been good playing it with friends and concurring the galaxy together (or secretly preparing to conquer each other), though the matchmaking system is a bit antiquated. All the mechanics of the game are deep and provide all the customisation that you need. The best thing I can say is that at the end, even though this is a real-time game, I would say that I found that ‘one more turn’ loop, which while fun did mean that one night I was so engrossed that I went to play an hour or two before bed and then the birds started chirping at dawn … whoops.

Have you played Stellaris?, let us know what you thought in the comments below, feel free to share this review on any of the social medias and you can follow us Here. Check out all our past reviews and articles Here, and have a happy day.