TL;DR – It takes the formula of Civilization VI and adds to it in very different and unexpected ways boosting the core game and adding some new flavour to the experience

Review –
If there is one thing that you can almost reliably count on is that a Civilization game is going to get an expansion at some point (and hopefully more than one). It is one of those gaming truisms, like there will be a controversy with each Grand Theft Auto game release, or Nintendo is going to Mario up every console it makes, the things that help make life that little bit more predictable in a world of chaos. So today we are going to explore Civilization VI’s (see review) first expansion pack Rise and Fall, which both describes some of the mechanics in the game but is also a homage to the popular mod Rhye’s and Fall.

So for those who have not experienced a Civilization expansion before usually what happens is a twofold process. So, on the one hand, you tend to get more ‘stuff’ that is more civilizations, more leaders, more wonders etc. However, alongside that, you also get changes and additions to the way the game mechanics work that can fundamentally change how the game plays. In today’s review, we are going to look at both sides of that process to see how well integrated they are. 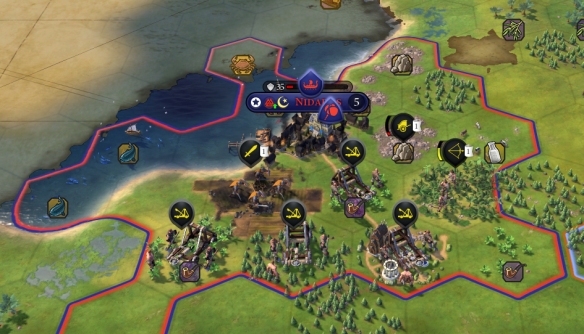 The AI is much better at taking cities now, well at least until walls come along Image Credit: Firaxis Games

However, before we get into that I wanted to take a moment to talk about one of the best features of the expansion, and really the whole game, and that is the music. The music was arranged and composed by Geoff Knorr and Roland Rizzo working on the different civilizations, with Phill Boucher joining them to work on the Atomic era of every civilization. The first thing that is really clear is that the composers have put the effort into researching each and every civilization they worked on and you can hear that in the music. However, it is not just in the music they composed, they worked to get amazing musicians that were masters of their civilization’s music to contribute. So you have the Korean Performing Arts Academy of America, Trio Kavkasia, Tengger Cavalry, the Poundmaker Singers, and more coming together to add to the symphony of the soundtrack. One of the mechanics of the game is once you meet civilizations their music is added to your game, and it makes searching out and finding new civilizations a joy. Indeed I have had the soundtrack playing as I write this review.

Let’s start with looking at the ‘stuff’ that has been added to Civilization VI: Rise and Fall, and that is the Civilizations, wonders, and districts. So there are eight new civilizations and one new leader for a past civilization added to the expansion pack and they stretch across the world, and across old favourites and new entries into the series. So we have The Cree, India, Georgia, Korea, The Mapuche, Mongolia, Netherlands, Scotland, and The Zulu. Across the expansion, there is a good blend of different civilizations with different abilities, from your warmongery Mongolia and Zulus, the science-based Korea, the culture powerhouse Mapuche, the trade orientated Cree, and #GottaBuildEveryPolderPossible the Netherlands. In the past Civilization games have been critiqued as to their Euro-centralism with a large focus on Europe, the Fertile Crescent, and the Mediterranean coast. However, one of the things that are really interesting with the civilization choices is the focus on civilizations that fought for their independence against colonial oppressors and eventually lost. This, of course brings out those naysayers that chant that these civilizations are not worthy for entry, forgetting that the only criteria for entry into the game are that Firaxis wants to put them there. Not only are they fun to play with, they also help fill in some of the big holes in the True Start Location map. After playing through them, it was good to see the polder lose its flat land requirement in the March 2018 patch, but it still feels less useful than other similar unique tile improvements like Australia’s Outback Station and Indonesia’s Kampung. Also, it feels like the Cree should start with their Okihtcithaw rather than its warrior.

The Loyalty system helps create tension across the board, especially when the ages comes to an end Image Credit: Firaxis Games

The game adds a whole pile of new wonders both natural and manmade to make each game that little bit more different each time. Now the new wonders are all very situational, they work best if you have followed a certain game style or if you have a certain random map generation. This might be frustrating I think it helps give the game a bit more flavour, because if you have put in the effort into having a lot of envoys then sure the Kilwa Kisiwani is going to help your game out, or if you have a lot of camps then sure you are going to want to beeline for the Temple of Artemis. There are a couple odd moments in the game, like the St Basil’s Cathedral not having a tundra requirement (though it is good to actually have the St Basil’s Cathedral in the game this time) and I’ve not yet played a game where the Statue of Liberty really was all that useful. The new natural wonders are all a delight and really add something unique to the game, like the Zhangye Danxia, or the Matterhorn which is this game’s Mt. Kilimanjaro, though on steroids. I think my favourite has to be Mount Roraima, and if you happen to be Australia a stumble across it early in the game, you settle that, and you settle it fast. Add to this two new districts, the Government Plaza, and the Water Park. The Plaza really helps define your civilization and since you can only build one, and only build one building in each tier, every choice because important. The Water Park is nice and as the second water-based district can help those land deprived cities out.

Now while there is all the stuff that gets added to the game, the other side, as I mentioned, is the game mechanics that get added or changed in the expansion, and I think this is where the game really shines. To start with there is the loyalty system where each city has a loyalty level and if that falls to zero the city can rebel away from you. So now forward settling comes with a danger that you might lose that city if you are not careful, and even well-planned settlement can fall if you get stuck in a dark age while your neighbour’s golden age comes into full swing. Indeed, ages are the other big change to the game, where you get Era Score for doing certain things, like building a wonder, concurring a capital, expanding your religion, and many more. If you don’t do well you might get into a dark age, or if you do ok you get a normal age, and of course, it is time to bring back that golden age. In my playthroughs I have only ever been in a dark age once and if you learn the different era score triggers you can do a good job of being mostly in golden ages throughout the game. Now I think there should be a little more bonuses for a golden age and a little more negatives for a dark age, for as it stands it is easy to game the system and do a dark age to heroic age and back again swing throughout the ages, and while that is fine I think the penalties should match it. These changes with the tweaks to Eurekas help slow the game just a little, but I think it is a good change.

To add to these there are also now governors that you can recruit and place in your cities. Every civilization gets the same list and because the upgrades are handed out sparingly, you have to choose between unlocking them all or upgrading some, the tall v wide debate. I really like Liang the Surveyor, because I am a builder, and the Fishery tile improvement can really help with that, also once you harvest with Magnus the Steward you will never go back to the way things were. Each sort of breaks the game, but because the effects are limited to one city it all works really well. There are also emergencies that are meant to reign in snowballing civilizations, they are nice, but I think this is something that will work better in multiplayer where there is real incentive to follow through on them. The last big change is Alliances which to be honest I don’t have all that much experience with because they don’t come up that often and I have not have the chance to test it out in multiplayer yet.

In the end, do we recommend Civilization VI: Rise and Fall, yes, yes we do. It is a solid expansion for what already was a pretty good game. The game mechanics help deepen the experience and reduces the late game drag, and all the new additions will make each time you load it up a new experience. Hell, you should get the game just for the Cree score alone, but I might be alone in that suggestion.

Have you played Civilization VI: Rise and Fall ?, let us know what you thought in the comments below, feel free to share this review on any of the social medias and you can follow us Here. Check out all our past reviews and articles Here, and have a happy day.

Disclosure – I am a moderator on the site Civfanatics of which several staff and players are members of the ‘Frankenstein Testing Group’, Firaxis Games internal playtesting team. I am not part of this team nor do I have any links with Firaxis Games or 2K.